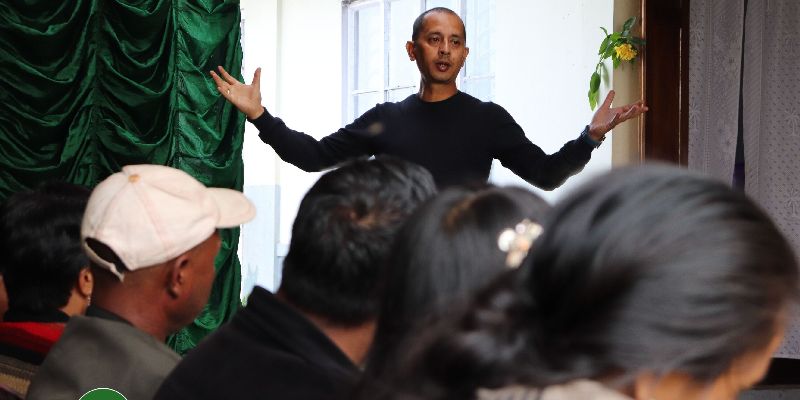 “When the last tree is cut, the last fish is caught, and the last river is polluted; when to breathe the air is sickening, you will realize, too late, that wealth is not in bank accounts and that you can’t eat money.”

This quote rings more bells today than any other time in history. Farming as a profession has lost the dignity it deserves and has become yet another sector that belonged to local communities around the world but is now being appropriated by global capitalists in the name of endless economic growth. As a civil society organization that has worked for women’s rights for decades, North East Network sees this as a form of colonization that is set to affect women’s rights the most. Meghalaya is one of the most vulnerable states in the region due to the massive loss in farming personnel and resorting to GMOs and chemical pesticides.

Tree tomatoes, for example, are unique to the region. They have great resistance to transportation. However, many farmers today are forced to grow hybrid varieties of tomatoes that need artificial chemical fertilizers and pesticides that are produced by the same companies that make the seeds.

In order to address this, we collaborated with Samir Bordoloi, a farmer from Sonapur, Assam who has begun his own farming revolution there through his organization SPREAD NE. A farmer in his own right, Samir believes that traditional farming practices and local food have the potential to capture the global market and make farming profitable again. He prefixes his own name with the term ‘Farmer’ as a symbolic gesture to restore dignity to the profession. NEN Meghalaya coordinated a day-long interaction with Mr Bordoloi and the women farmers group in Mawryngkneng that opened the latter’s world to a whole new technical and economic model of farming. He shared that nature had immense resources that can be harnessed in harmony and by building a symbiotic relationship. In Sonapur, SPREAD has developed the concept of a food forest where naturally growing crops and forest produce are plucked for food. It has added in Agro-tourism as a means of income to increase profitability by adding services. While doing this, it is imperative to retain ownership of seeds as only sufficient nutrition for farming families can ensure the same for consumers and that ability is severely compromised if each seed is a cash transaction.

Tip #1: Ingredients: 20 litres of water, a handful of termite hill soil, a mug of rice gruel, one hand full of wood Ash. Mix all the ingredients; stir it for 20 minutes clockwise and anti-clockwise. Take this mixture to the forest sprinkle it with grass.

Samir went on to give a step by step guide to the group on how to make bio-intensive raised bed farms along with many recipes for curing plant diseases and increasing soil fertility thus producing inexpensive farming inputs at home. In a discussion with the Block Development Officer of Mawryngkneng, it was discussed that the North East doesn’t need subsidy to grow crops (as is the current scheme) it needs them for processing and marketing. This is the key to generating livelihood through slow food production from homestead gardens that are endemic to North East India.

Tip #2: Fish Scales, Jaggery Water, 1 litre of water. Take a plastic container; fill it half with fish waste and half with jaggery water. Cover the mouth of the bottle with a cloth. Keep it in a dark place or bury it in the soil with dry leaves. After about two weeks, the mixture becomes black. Mix this is with the water and spray it in your soil.