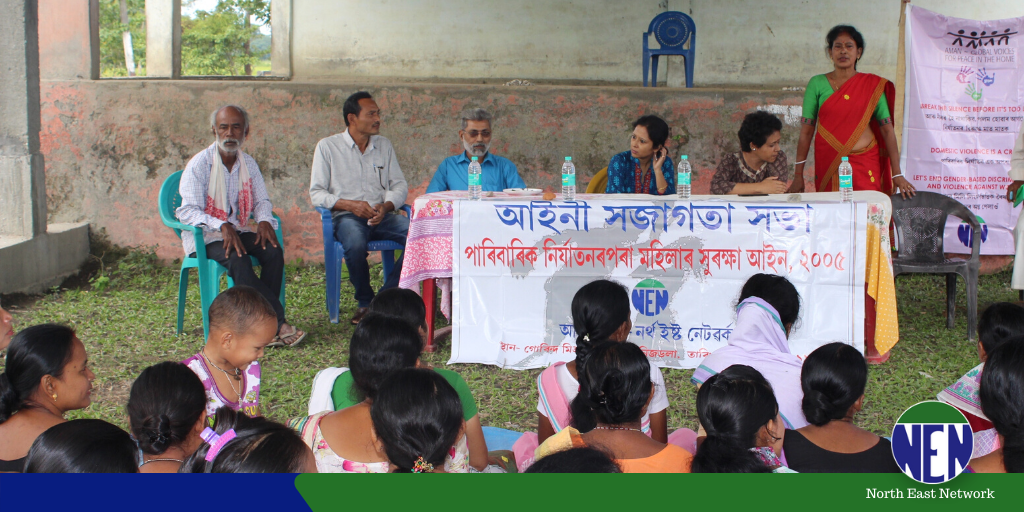 Domestic violence is deeply rooted in our society and it violates life, dignity and safety of women in private spheres. Article 39A, of the Constitution of India, ensures to provide free legal aid by suitable legislation or schemes for securing justice. However, the majority of the population remain unaware of the prevailing legal system of the country and their constitutional rights to seek justice. As a result, women do not approach for existing support services due to shame, fear, guilt and ignorance.

In Assam, according to NCRB 2017 data, there is an increase in the rate of crime against women to 143.6 and 60.9% of women experienced cruelty by the husband and/or his relatives. According to National Family Health Survey (NFHS – 4), 2015-16 released by Union Health Ministry, every third woman faces domestic violence of various forms (physical, emotional, sexual and economic) since the age of 15. Protection of Women from Domestic Violence Act (PWDVA) was passed in 2005 ensuring to protect women from abusive husbands and/or from his family members. The law upholds the rights of the survivor.

NEN has been a part of AMAN Network forum, Global Voices for Peace in the Home to end domestic violence. The network was formed to work towards the implementation of the Protection of Women from the Domestic Violence and advocate with the stakeholders. In this context, NEN collaborated with District Social Welfare Office Golaghat to create awareness on the PWDV Act, 2005. Legal awareness meetings were also organised on 6th November in Nizdola, Udalguri district and on 20th November in Nahira & Sarpara, Kamrup (R).  More than 210 women and men from different villages across 3 districts participated in the meeting.

Rashmi Rekha Borah and Nilanju Dutta from our team in Assam led the discussion along with Adv. Nandita Deka, from Human Rights for Law Network (HRLN).

The objective was to create mass awareness on the PWDV Act, forms of domestic violence, the role of stakeholders and other support services. In the process, NEN tried to create a space for women to openly talk about their experience of violence in domestic spheres. NEN believes that every woman has a right to speak while society needs to listen to her narrative of abuse and discrimination, the state must take responsibility to address the issues of women. Such programmes create the groundwork for future action.