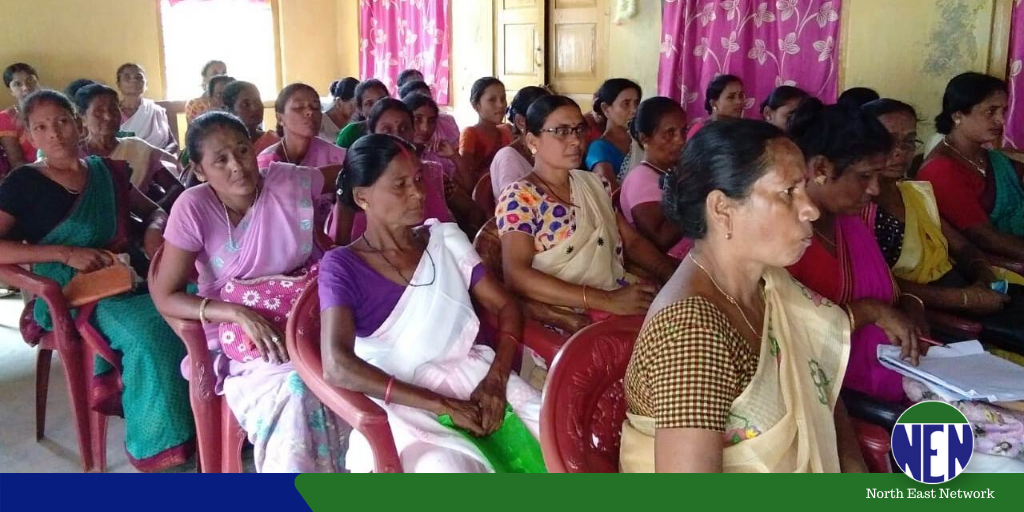 After the 73rd amendment of the Indian constitution in 1992, the Panchayati Raj Institutions achieved constitutional recognition in 1993. The Assam Panchayat Act was promulgated in 1994. Panchayati raj is a three-tier system, viz. Gram (Village) Panchayat, Anchalik (Intermediary or Block level) Panchayat and Zilla (District) Parishad. Gram Sabha is another tier added at the bottom to increase direct involvement of the community in the process of governance. Gram Sabha has been envisaged as the foundation of the Panchayati Raj system and during Gram Sabha, there should be discussion and plan about the rural development as well as selecting beneficiaries for the schemes. It has been observed that male members try to smother women in the general Gram Sabha meetings taking advantage of women’s fewer attendances. Many women do not attend meetings due to their preoccupations with household chores and children, while some women are not informed about the meetings at all. Thus their participation is always sparse in the general Gram Sabha.

With an objective to strengthen our peer leaders’ participation in the local governance system and decision-making process at the panchayat level, North East Network organised a 2-day workshop on 27th & 28th June 2019 at Don Bosco Institute, Kharguli Guwahati. 43 women leaders from 6 districts namely Darrang, Dhemaji, Kamrup, Golaghat, Sonitpur and Udalguri of Assam participated in the workshop.

The workshop highlighted the discrimination of women within the local governance system and the importance of women’s participation in it in order to strengthen and make the governance system more inclusive. Other issues that were discussed during the two days were Mahila Gram Sabha, the importance of reservation, women’s place in autonomous councils and significance of 73rd amendment in creating a legal and formal space for women in decision making etc. The sustainability of village development begins with the active participation of people in Gram Sabha and how the participation of people in the process of decision-making, implementation and evaluation of government schemes for the village development. The discussion focused on how to organised Mahila Gram Sabha to raise issues faced by women particularly.

NEN initiated a process of organizing Mahila Gram Sabhas in the select districts of Assam to increase and strengthen women’s participation in the decision-making process of the local governance system and to ensure that their voices are heard. NEN held a series of meeting with the women collectives and Panchayat members in Dharikati, Sonitpur; Bordolguri, Darrang and Hatigorh, Dhemaji, to raise awareness on the benefits of organizing Mahila Gram Sabha in their Panchayats. The representatives, community women and men from the Panchayat expressed that it would provide a platform for women to discuss their issues and concerns.

With the support of community women and Panchayat representatives, 2 successful Mahila Gram Sabhas were organised on 15th September in Darrang and 29th September in Dhemaji district. More than 120 women participated in these Mahila Gram Sabhas and signatures from women were collected to be placed before the General Gram Sabha on 2nd October 2019. The issues which were raised during Mahila Gram Sabha were prioritised and a list was prepared, focusing more on the deprived women to raise it in the Gram Sabha. Issues listed out were low-cost latrine, PMAY, construction of roads in interior and remote villages, National Social Assistance Programme Schemes, inclusion of women under BPL, community hall (space) for women, skill-based trainings on sustainable livelihood for youth.

As a result of this effort made by NEN, there was increased participation of women in these Gram Sabhas. Community-women raised questions on the transparency of government budgets and placed suggestions to include a member from the civil society organisation in the Panchayat Committee.

Consequently, in Darrang, because of the memorandum submitted by women in the General Gram Sabha, a Ward Sabha was held in Ward No. 8 under Bordolguri Panchayat, where representatives of the panchayat discussed about various issues of the ward which will be placed before the Panchayat Committee and assured that beneficiaries whose names are not included in SECC 2011 but falls under BPL category will also avail government schemes and a case of Rabiya Begum was addressed during the meeting whose name was removed earlier from the list of PMAY beneficiaries. Representatives of the panchayat made sure that her name will be included.

Interface and workshop on Protection of Women from Domestic Violence Act, 2005 and Sexual Harassment of Women at Workplace (Prevention, Prohibition and Redressal) Act, 2013 , Assam
January 20, 2023

Developing a Gender Equitable Perspective On Laws for Women – A Workshop for District Lawyers, Assam
January 20, 2023

Interface and Workshop on Sexual Harassment of Women at Workplace (Prevention, Prohibition and Redressal) Act 2013.
April 8, 2022
Go to Top
error: Content is protected !!