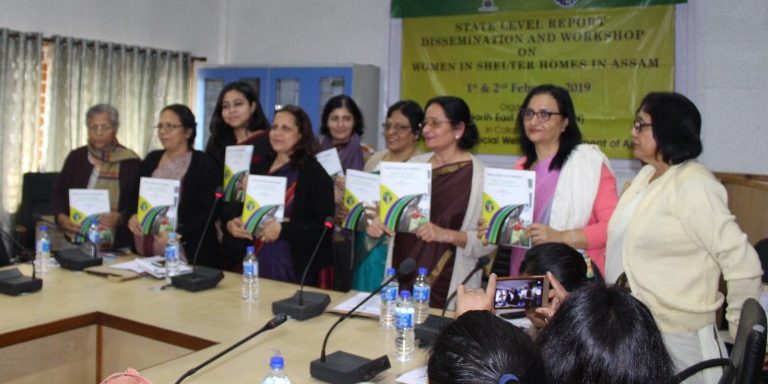 Violence against Women (VAW) in Assam is all pervasive and is present in homes, work areas and public spaces. Women who are homeless and stay in shelter homes are even more vulnerable and cases of violence go largely unnoticed. In an attempt to address the pressing concerns around homelessness vis-a-vis shelter homes and the range of constraints, lapses and pitfalls in leveraging the same, a five state action research was initiated in Assam, Meghalaya, Karnataka, Tamil Nadu and Delhi. In Assam it was undertaken by North East Network (NEN). On 1st and 2nd February 2019, a State Level Report Dissemination cum Training Workshop on Women in Shelter Homes in Assam was organized by NEN, to share the findings of the Study titled “Voices from the Fringes” which narrates “Experiences of female survivors of violence in shelter homes: Assam State Action-Research Study”. Participants in the study have revealed of violence in some form or the other and also about the lack of information or access to shelter homes and different institutional care services. Moreover, there are gaps in the coming together of various service providers to ensure shelters as safe spaces.
The main objectives of the workshop were to sensitize the officials on the schemes relating to shelter homes; Learn the mechanisms and their roles under the various schemes and guidelines; Understand gender based violence and feminist counseling for woman survivors of violence and discuss the Legal responses to violence against women.
Anurita Pathak Hazarika, Programme Director, NEN and Minakshi Bujarbaruah, Research Consultant, shared the Study with the participants. The Rest of the Workshop Sessions were led by Dr.Monisha Behal, CEO, NEN, Juri Phukan, IAS, Director, DSW,Amrita Nandy, Independent Researcher, New Delhi,Nilakshi Sharma, Centre Co-ordinator, Kamrup (M),Mandira Barua, Asst Research Officer, DSW, Rashmi Rekha Bora, Project Co-ordinator, NEN,and Nilanju Dutta, Project Manager, NEN.
Participants included officials of Directorate of Social Welfare, district level government officials of Shelter Homes, in addition to national scholars, representatives of NGOs and concerned citizens.