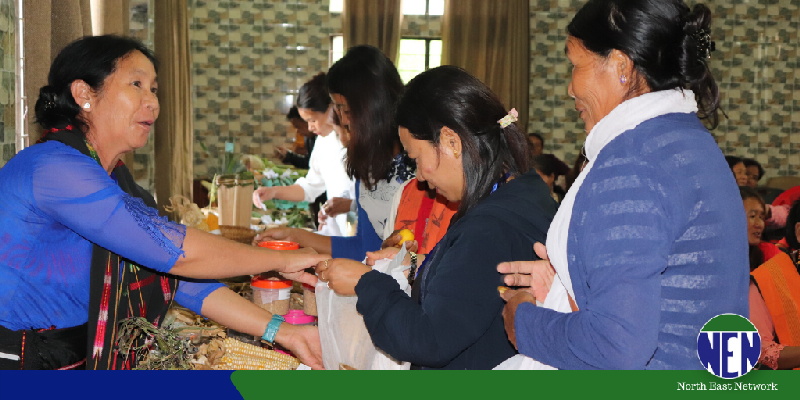 Women are the largest contributors to the agricultural sector in Nagaland (over 70%) and yet their labour is invisible to civil society and as a result in agricultural policy. The Mahila Kisan Adhikaar Manch (MAKAAM), a network of organizations that works to ‘visibilise women farmers and to create and secure rights over productive livelihood resources’ that works in 20 states today has a network of nine like-minded organizations in Nagaland.

This Nagaland Chapter observed the International Day of Rural Women (IRWD) at Kohima on the 15th of October by holding a Women Farmer’s Convention in the City that saw the participation of over a 100 women farmers from all districts of Nagaland and representatives from the Department of Agriculture and its allies.

Challenges to the welfare of women farmers in the state came out in a big way in the dialogue that ensued. A glaring global challenge that is going to impact women farmers more severely than anyone else is Climate change. The United Nations declared ‘Rural women and girls building climate resilience’ as the theme for this year’s IRWD in this regard. Untimely rains and changing temperatures are affecting even long functioning practices like traditional seed banks shared Adile, one of the women farmers at the convention.

To make things worse, infrastructure and technology is not advancing at the same pace that it should have. The little that does exist does not make its way to marginalized women farmers. The threat of imposition of foreign food is advancing and poses the risk of eventual disappearance of traditional food and farming systems. Lack of proper storage facilities only aggravates the situation. This does not allow women farmers to go much beyond subsistence farming as the surplus will rot without ever reaching markets.

Women farmers who do make it to the market, face many inconveniences as there are very few vending zones that have any kind of shelter or basic facilities like toilets.

All the above issues reflect a lack of understanding on the part of policymakers. However, even in instances were pro-farmer policies have translated into schemes, rural women find themselves at a disadvantage due to the multiplicity of departments and unrecognition of situations unique to women. For example, women farmers are often denied farmers credit cards as they do not own land to provide as collateral.

The day-long deliberation resulted in recommendations that the State could take up to improve the status of women farmers in Nagaland.

Setting up of a Women Farmers Council that advises the Department of Agriculture on policymaking for more inclusive and just schemes accessible to the former.

A single window for all agriculture-related services like registration of women farmers cooperatives, monetary loans for inexpensive transport facilities loans, etc must be set up at the earliest.

The government must recognize indigenous farming systems and seed banks in their policies. This will facilitate agricultural scientists and Krishi Vigyan Kendras to work together with women farmers who have the knowledge of indigenous farming systems and seed banks to improve local food and combat the introduction of foreign food that will threaten self-sufficiency. Other benefits will include sustainable ways of improving soil health and growing climate-resilient food like millets.

The State’s Education Policy must include agriculture in the curriculum to influence our youth to take up agriculture as a profession.

All in all, more intensive collaboration is required between the government and women farming communities to ensure that society’s primary producers get the dignity of work that they deserve and are sheltered from the ill effects of climate change, a phenomenon that they are responsible for resisting.