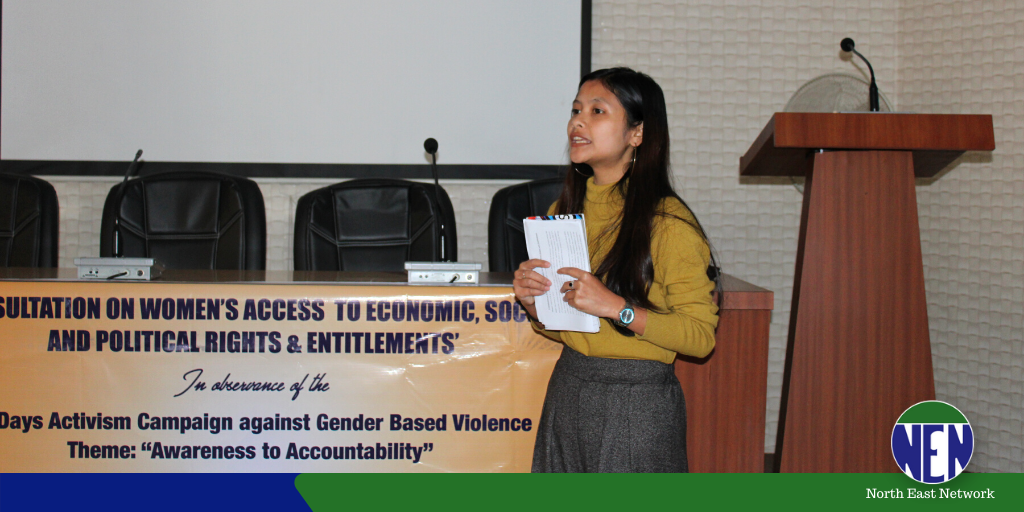 In observance of 16 Days of Activism on Gender-based Violence

Today well into the 21st Century, women have carved a niche for themselves in the field of academics, business, management and form a large section of the unorganized sector workers in India. However, structural violence against women is as rampant if not intensified across professions and in the domestic sphere. In the years that NEN Meghalaya has worked towards the emancipation of women of the state, we have come across such violence and victims almost every day. While we addressed this through capacity building of women’s groups and the formation of collectives, we were constantly faced with the lack of documented evidence and data to support our endeavours. A while ago, we decided to collect this evidence ourselves and that is how the Study on Access to Economic, Social, Cultural and Political Rights of women in the State, began. The study conducted was an outcome of the consistent engagement with the women’s groups in several districts that prompted us to dig deeper into discrimination and abuse that arise due to gender stereotypes.

The results of the Study were revealing and gave much strength to our movement against gender-based violence. Hence, on the 6th of December, in observance of the Global Campaign of 16 Days of Activism Against Gender-based Violence, we held a consultation with stakeholders to discuss our findings and to bridge the gap between the government and the community in battling gender discrimination. The programme also intended to make local authorities accountable by providing community women with a platform to share concerns in accessing social protection and security schemes. One of the main issues that NEN wanted to address was wage disparity in certain villages under the MGNREG Act which goes against the mandate of the Act to ensure that equal wage is paid to both men and women.

The programme paved way for future collaborative work with the Block Development Office of Mawthadraishan Block in addressing the concerns that the study revealed. It also created awareness among the representatives of the women’s groups from different villages who can, in turn, strengthen the movement for access to rights and entitlements within their own villages and dismantle stereotypical mindsets that continue to exist and culminate in discrimination against women.

5 DAYS VIRTUAL TRAINING FOR THE STAFF OF ONE STOP CENTERS & SWADHAR GREH OF MEGHALAYA
December 24, 2020
Go to Top
error: Content is protected !!