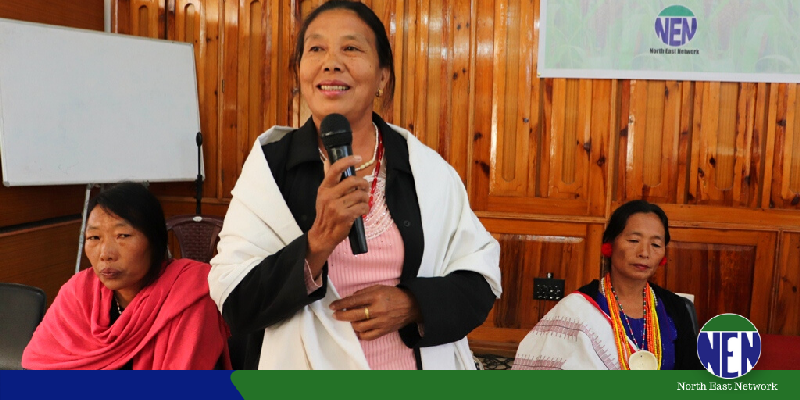 North East Network Nagaland organised an Experience Sharing Workshop for women millet farmers of the North East in Kohima on 4th December. Supported by the Millet Network of India (MINI), the workshop brought together  56 participants comprising of millet farmers from Nagaland, Meghalaya, Manipur and Kalimpong (West Bengal), and NGO representatives like SURE, SSC, NESFAS from Meghalaya, IRMA from Manipur, KKKS from Kalimpong; NEIDA, KMH, NEN from Nagaland.

Ms. Pilu, Millet Sister from Phor village, Nagaland: “From the time of our forefathers people who cultivated millets are considered to be rich people. Though we never gave up millet cultivation, our millet fields grew smaller. One reason is that Millet is a labour intensive crop and our children no longer want to be agriculturalists. Also, we lack the infrastructure to process raw millet. The other reason people can’t cultivate is birds attacks. In our tradition we also gift millets to our daughters in marriage”

NEN in Nagaland has done pioneering work in the revival of millets in farming and food culture. The regional workshop aimed to understand the current status of millet cultivation and consumption in the NE region, and to identify the key challenges and opportunities in millet-based biodiverse food and farming systems. It also aimed at facilitating Farmer to Farmer exchange learning on innovative practices and a discussion the way forward for the recognition of millet farmers’ knowledge and bringing millets into the agricultural policies of the State and NE region.

Ms. Sita Mary Nongrum, Millet Sister, East Khasi Hills, Meghalaya: “Until 1998, millet was our staple diet, but the entry of rice through the market and the Public Distribution System, changed the diet of the people. They have almost stopped cultivating millets and instead cultivate broom for enhanced cash income. There is no market for millets and we need cash for children’s education. Now that I know its nutritional and cultural value, I encourage people to grow more millet”.

Ms. Seno Tsuhah, Director Programmes, NEN, and Member of Steering Committee, MINI, in her keynote speech highlighted that wing to numerous factors such as the feminisation of agriculture, shrinking common lands, increased corporate control of agriculture, lack of policy support to millet-based biodiverse agriculture, millets, a phenomenally climate-resistant crop, have been marginalised and women farmers play a central role in its conservation their role and contribution needs to be acknowledged by the Government and society.

Ruth Sothun, NESFAS, Meghalaya: “In the year 1985, there were 8 varieties of millets in a village called Nongtraw where NESFAS works.  From 1986 till 2000, millets started to decrease, because of the entry of PDS rice, basket weaving and coal mining, where people started migrating out for work. By 2004, only 5 households were cultivating millets.  In the year 2005, intervention from various NGO’s took place in this place. In 2013, NESFAS intervened and created mass awareness. They initiated a school garden, where children are involved in farming. Since then the village people started to cultivate and currently, the entire village has revived the cultivation of 4 varieties of millets.”

A documentary titled Millets-Securing Lives run during the workshop gave the participants a snapshot of the Millet movement in Nagaland’s Phek district. This was followed by a session on government schemes that can potentially boost millet farming and the lives of the women that grow it. NEN Nagaland has picked Millet farming as a tool for gender transformative development that will also combat the grave effects of climate change and through such platforms, we hope to give momentum to this intention as part of the feminist movement at large.

Ms. Gita Chetri, Farmer, Kalimpong, West Bengal: “In our community we cultivate mostly organic vegetables, but do not focus much on millets. The most widely cultivated variety of millets is kodo millets which has a huge market demand in Sikkim.  But after attending this workshop, I have understood the potential of millets and will take back this knowledge and share with my community people, and encourage them to cultivate more millets”.