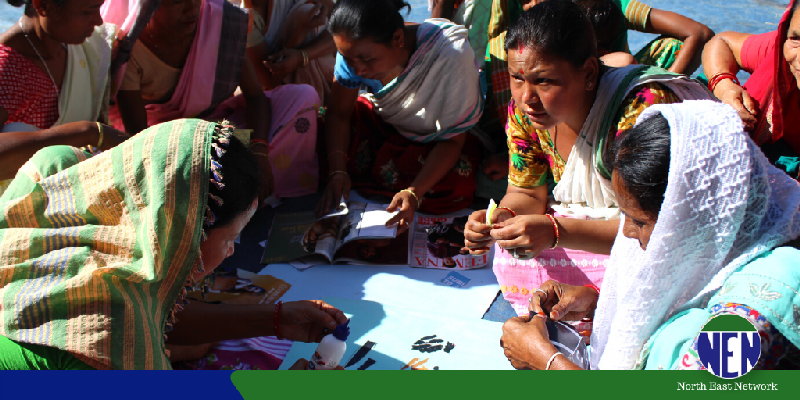 16 Days of Activism Against Gender-Based Violence

Worldwide, the 16 Days of Activism begins on 25th November and ends symbolically on 10th December which is the Human Rights Day. The global campaign which originated in the USA in 1991 is now observed in every nook and corner of the world and thus, it sees a connection from micro village campaigns to macro-level global activism. NEN joined hands with this global and other local movements to build awareness amongst communities and ensure state accountability in order to end all forms of violence against women and girls, thus, ensuring a safe, dignified and equal society for all generations.

We strongly believe that the women’s rights agenda must be the top priority for any government so that women can enjoy all economic, social, cultural and political rights through rights based, empowering, and less cumbersome procedures meant to access state entitlements.

The central demand of this year’s campaign was to –

Based on the theme ‘Awareness to Accountability’, North East Network, Assam conducted a two-day workshop in collaboration with District Social Welfare Office and Office of the Superintendent of Police, Dhemaji consecutively on 6th and 7th December 2019. The programme was on ‘Violence against Women and Legal Remedies’ related to PWDV Act 2005 and SHWWP Act 2013 for the district stakeholders. Day 1 saw the participation of 49 stakeholders vis-a-vis Accredited Social Health Activist (ASHA), Anganwadi Workers (AWW), Auxiliary Nurse Midwife (ANM), Disability wing of DSW, Child Protection Officer (CDPO) and representatives from Family Counselling Centre (FCC), Ujjawala home and other local organisations of Dhemaji. On the second day, 29 police personnel participated in the workshop. The women police officers shared their personal experiences of sexual harassment and they will now demand for the formation of Internal Committee (IC) under SHWWP to the Superintended of Police (SP) of their district.

Poster and collage making is a textual and graphical medium to spread messages and express ones’ views. In Kamrup, on 28th December NEN collaborated with Dohali Korka Uscha Madhyamik Vidyalay, Kamrup and organised an event on poster making and discussion on gender discrimination and violence against women. In Udalguri on 6th December, a collage-making programme was organised for the community women. Students and community women for the first time explored poster and collage making while trying to portray issues of violence against women, restrictions on mobility for women, violence against pregnant women, alcohol-induced violence and forced marriage by family etc. During the discussions, women from the community could relate the challenges that women face throughout their lives, which got reflected in their artwork. The principal of the school appreciated the initiative and asked for future collaboration and students showed interest to participate in such creative activities in future.

Street play is a form of theatrical performance and presentation in outdoor public spaces to create mass awareness on various social issues. On 7th December, women peer leaders and youth from Golaghat performed a street play focusing on early marriage and its impact on young girls and women. More than 100 people gathered to watch the play. Two viewers shared that we should collectively raise voice against the practice of such discriminatory social practices that prevail in society.

We believe that supporting the Campaign will ensure and assure women and girls their rightful claims and spaces in their communities.