Community Awareness Programmes on Crimes against Women and Children 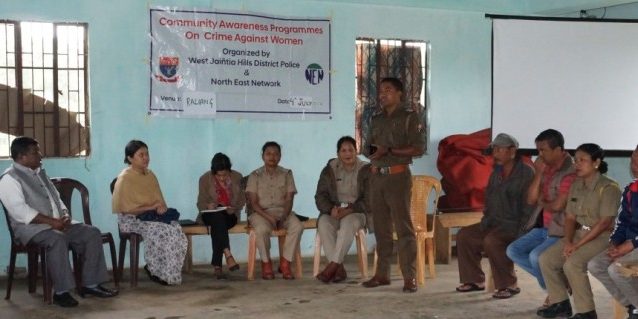 West Jaintia Hills District Police in collaboration with NEN organised Community Awareness Programmes on Crimes against Women and Children in the following communities:

Resource persons of the programme conducted in different villages were:

The objective of the programme was to re-shape the mindset of the general public, to create sensitivity towards women rights, to mitigate violence against women in Meghalaya and generate awareness in the community on gender based discrimination which is deteriorating the society. The key topics covered in the programme were Crime against Women: Domestic Violence, Rape and Sexual Harassment at Public Places, Sexual Harassment of Women at Workplace, Domestic violence, Teenage pregnancy, Gaps between the Police and the community , Cyber Crime, Definition of Violence against women- United Nations, Forms of Violence, who is the perpetrator and reasons for violence to occur, Who is responsible for complaint against such cases, International and National legal provisions and remedies for addressing, preventing and prohibiting crimes against women.

The programmes provided a scope for NEN to work consistently with the local authorities of the community who are the influential groups in the society. The awareness programmes led to assuring the support from the Rangbah Shnong to take the initiative to conduct more programmes like adolescent outreach programmes and regular community meetings on crime against women and children in their respective villages. The programmes paved a way for strengthening the existing support system like Village Dorbar, Community and the Clan as the primary agents to support women survivors of violence. The programmes also bridged the gap between the community and the Police and information was provided about reporting cases to the District Police and encouraging the community to approach the Police anytime.