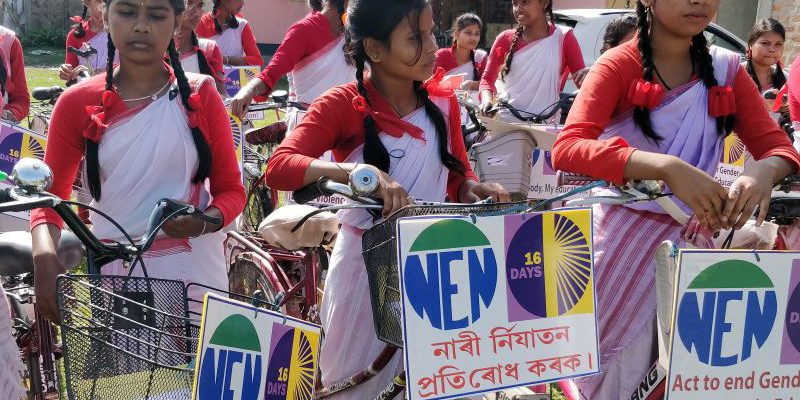 Based on the theme ‘Together We Can End Gender Based Violence in Education’, NEN Assam in collaboration with 3 local schools organised different events in the districts of Dhemaji, Kokrajhar and Udalguri. More than 400 participants were mobilised through these campaigns and 900 flyers were disseminated.

On 1st December 2017, NEN in Collaboration with Dhemaji Town M.E. School organised an Art Competition on the topic “Equality between boys and girls” for the students of class 1 to class 9. Students from two schools participated the competition.

On 3rd December 2017, NEN in collaboration with Victory M.E. School, Howriapet, Kokrajhar, organised a Skit Completion on “Impact of child marriage in education”. 4 student groups participated in the competition. Usha Rani, Field Investigator from Darrang also recited a poem on the issues of violence against women.

On 28th of November 2017, NEN organised a Cycle rally in collaboration with Kalaigaon Girls High School Udalguri, to raise awareness regarding gender based violence and discrimination and how schools can play a key role in helping children and young people develop healthy attitudes that can help prevent this form of violence and promote gender equality.

As part of celebrating the 16 Days Activism Campaign on the theme: “Together We Can End GBV in Education!”, NEN, Shillong organized 2 consultation programmes,