One Billion Rising Revolution 2020 Solidarity –to end violence against women 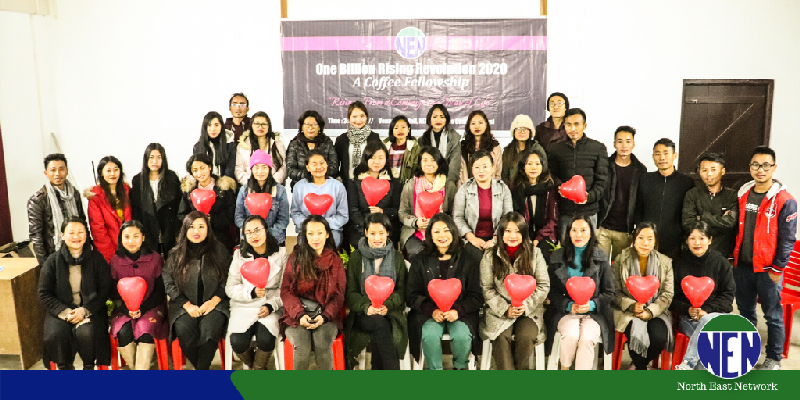 One Billion Rising is the biggest mass action to end violence against women (cisgender, transgender, and those who hold fluid identities that are subject to gender-based violence) in human history. The campaign, which launched on Valentine’s Day 2012, began as a call to action based on the staggering statistic that 1 in 3 women on the planet will be beaten or raped during her lifetime. With the world population at 7 billion, this adds up to more than one billion women and girls. (www.onebillionrising.org)

North East Network has been associated with the movement ever since its inception in 2013 to realise the vision of a violence-free northeast India in the larger scheme of things. This year we commemorated the day in Chizami Nagaland by hosting a dialogue among youth groups in the village over coffee. The discussion that followed was as personal as it was political with people sharing stories of discrimination, exclusion and a conscious demand for community-led interventions to tackle the ignorance that often masks violence.

Ms . Zawele Tsuhah observed that the lack of information among young women and girls leave them vulnerable to sexual violence even within their families. Zawele who is a youth leader, as well as a church leader, laments the lack of church support on issues relating to violence against women. The church is the most influential institution in rural naga communities and hence need to play a more active role in driving social transformation.

“The churches also need to give sex education – It is our duty to provide information to our youth,” she concluded.

Mr. Wetshe T.Mero another Church leader from Chizami Village shared his experience of how for generations church have defended and propagated the belief that women are inferior in comparison to men. He expressed how this misleading interpretation of religion has hampered the progress of their society. “Change starts with oneself and we must all start with ourselves,” he said. He as a man, believes in equality and practises it in his life, and contributes towards sharing responsibilities at home among other things.

Neitsope-u led a discussion around the participants’ idea of a man and a woman. A series of short clips and videos were shared to create gender sensitivity and awareness on differentiating sex from gender.

Besides the conversation the participants also indulge in a dance session – dancing and moving around, expressing and releasing stress as a way of self –expression.