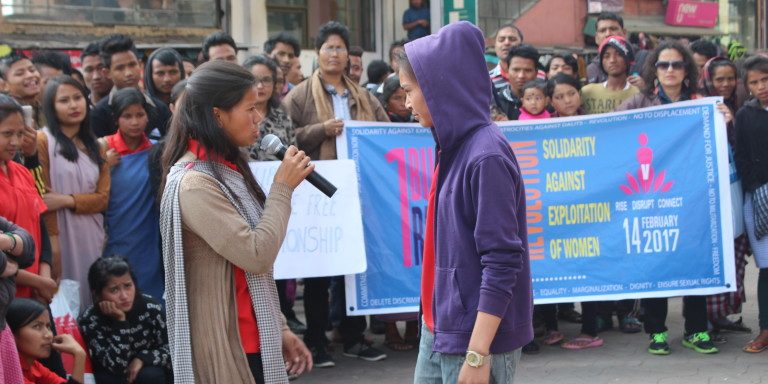 OBR Campaign in Shillong kicked off with a release of a Khasi song which was aired in All India Radio on the 14th Feb. The song speaks about the inequalities persisting in Meghalaya and the thirst for peace that people are longing to achieve. NEN used music as a medium for consciousness raising and awareness building, bringing about change in mindsets as well as people’s perception towards violence faced by women. The lyrics of the song are thought provoking and question how inequalities meted out to the women are accepted norms in the society. The song will challenge the listeners to question their mindset and enable them to become change agents in the society. It aspires to deliver the message about One Billion Rising to the masses specifically to the rural areas that cannot be reached through street plays, because music unites people even to the farthest place in the State.
NEN also conducted Street plays in three different locations in and around Shillong namely, Nongmynsong bazaar, Jhalupara bazaar and Police Bazaar on Domestic Violence which is rampant in the State of Meghalaya. The purpose of the street play was to create mass awareness on the issue of Domestic violence and the support system that victims of domestic violence can access.