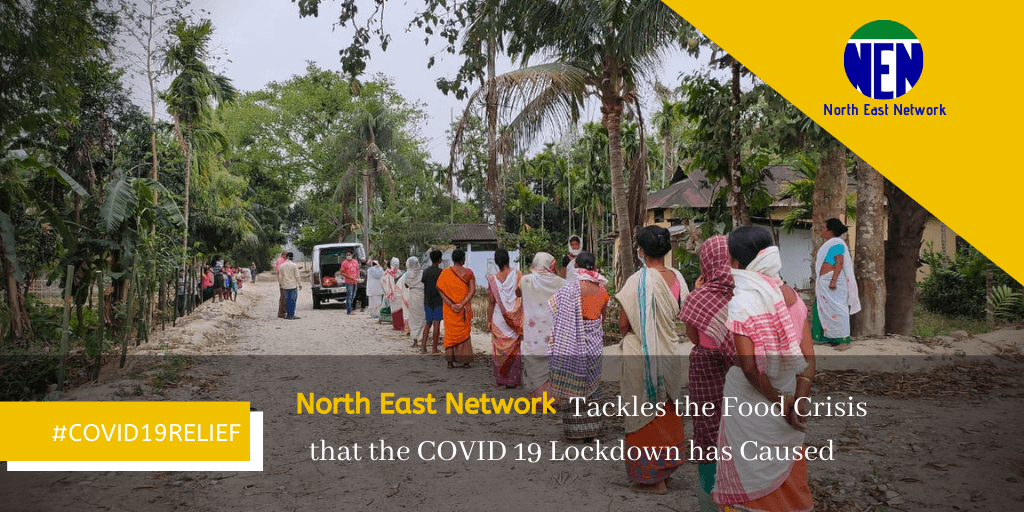 As we sit in our homes and put up social media stories of #stayhome, there are millions in the country were struggling to have one square meal a day even before the world was hit by the deadly virus. 21 days into a nationwide lockdown, India’s informal sector workers are the worst affected with the massive scaling down of economic activities that have left them without work and as a result without food.

North East Network has been working for the upliftment of marginalized urban and rural communities in general and vulnerable women and children in particular for two and a half decades now. We realize that the unprecedented hardships that such people are facing require us to step up and provide all the relief we can.

Therefore, with an army of our frontline workers including field workers, outreach workers and barefoot counsellors and in collaboration with Green Hub and its fellows, we began identifying vulnerable groups and ensuring they do not go hungry. The response we received was overwhelming with our associates and network reporting from across districts in Assam and Meghalaya and joining in our mission to help deprived families tide over the crisis.

Around Tezpur and in Sonitpur District, Green Hub along with other organizations like The UnCivilised Indian, Love and Acceptance, Tezpur Foodies, and the Rotary Club of Greater Tezpur has reached out to 475 families. This includes 28 families in Noltoli in the Nagaon District close to Tezpur.

Here the families mostly comprise daily wage workers and fishermen. Many of them are rickshaw pullers, e rickshaw drivers, domestic workers, factory workers, some elderly dependents. A large number of the families did not possess ration cards and even the ones that did had not been able to avail government relief schemes when we reached them. In Thelamara, a village in Sonitpur, we provided ration kits to Adivasi women. In addition to Green Hub’s investigation in the Sonitpur district, the ward commissioners and the local residents played a significant role in identifying groups in urgent need of food supplies.

In a village in West Karbi Anglong District of Assam, called Bongrung, 62 families were provided with ration by a Youth Group constituted by Serlibon Timungpi, a passionate young changemaker and a former Green Hub Fellow. The people there are largely small scale farmers that had lost a market due to the lockdown as transport has been curtailed. The warmth that they received us with despite trying times was inspiring.

In East Karbi Anglong, another former GH Fellow, Joyhind Engleng has covered more than 136 families,  about 40 of whom are directly supported through NEN. This is mainly around Diphu while in Silchar, in the Cachar District, 21 families were covered by Amin.

Additionally, we have reached out to 196 households across the districts of Darrang, Dhemaji, Golaghat, Kamrup (Rural and Metro), and Udalguri. Our Community Mobilizers have tried to reach out to the poorest of poor households and that included women without ration cards, disabled women, single women like widows and divorcee, survivors of domestic violence, female-headed households with minor children, families who haven’t received cash transfer or aid from any source earlier, needy weavers, marginal petty vendors, daily wage earners, abandoned or deserted women with minor children and the homeless.

In Meghalaya, we have assisted 44 families identified by our Outreach Workers in the Happy Valley area of Shillong with essential ration so far. Here as well the demographic comprised of single mothers, widows and daily wage workers. Our efforts for relief work have been directed to both rural and urban areas particularly emphasising on those who do not possess ration cards. The areas that we have reached out to include households from different minority groups who do not have voter ID cards and were also working as daily wage workers in menial jobs.

In other districts like Ribhoi that we could not reach directly due to the inter-district travel restrictions, we were successful in ensuring food supplies to about 20 families in Korstep by connecting them to a local group that is actively carrying out relief work in the area.

Overall, in the past week, we have been able to reach over 800 families in Assam and Meghalaya (792 in Assam and 44 in Meghalaya). This has been made possible by the tireless efforts of our women in the field, and the contributions of so many individuals and organizations that we and our communities will always be grateful for.

With the extension of the lockdown, we intend to continue our efforts across Assam, Meghalaya and Nagaland through our core teams, Green Hub, former GH Fellows and our extended network.

Debate on ‘Youths’ responsibility in mitigating Violence Against Women and children especially during covid-19′
November 27, 2020