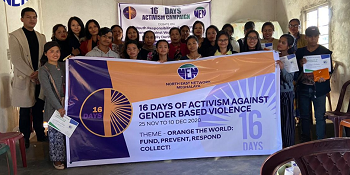 Meghalaya a state that boasts about the matrilineal system with its myth of women holding the upper hand is now witnessing a tremendous increase in crimes against women and children over the years and especially during the pandemic. Considering that VAW and Children is a social issue that has holistic effects in society, the involvement of all members of the society then becomes vital. Small endeavors of just talking about the issue can bring about change in perceptions and this can be successful if public discussions are held to put forth different opinions. NEN inaugurated the 16 Days Activism Campaign through a debate on the theme: “Youths’ responsibility in mitigating Violence against Women and Children especially during Covid-19” in Nongshillong, West Khasi Hills District that brought the involvement of youth from different villages to participate and deliberate on the theme. The programme created a platform for the youths to discuss issues that are not usually in the limelight. Keeping in mind that youths are the leaders of tomorrow and the pillars of society; it is imperative that issues such as this be openly discussed and debated to educe collective action.

Kong Aiti Kharsyntiew, the Chief Guest of the programme rightly mentioned that crimes against women and children do not occur because of the kind of clothes that women wear but it is to do with the mentality of the individual. The Secretary of the Village Defense Primary Committee – Nongstoin Area (VDPC-NA) reiterated that social change primarily starts at home and therefore parents play a vital role in molding their children.

The Debate competition consisted of 12 participants divided into the ‘Against and For the Motion’ teams. The debate perpetuated an intense discussion among the teams that elucidated the importance of young people’s involvement to bring about positive social change in society, the importance of parental guidance, sexual exploitation against women and children. The debate also brought to light the perception that many people hold until today that the dress code of women attributes to violence against women. Mayborn Lyngdoh, a Judge for the debate competition shared his thoughts and emphasized that youth play a pivotal role in addressing injustices against humanity in society. The best speakers, winning team, and the participants were awarded with small tokens of appreciation and certificates of participation.