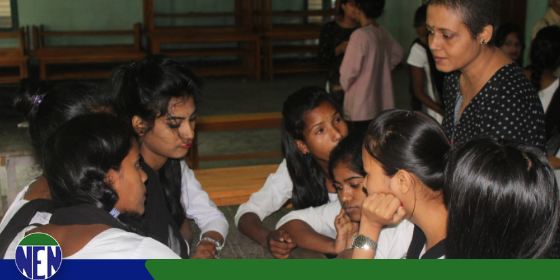 In acknowledgement of the vital role that educational institutions can play in achieving gender equality, NEN conducted a gender sensitization programme for the students of Marangi Junior College on the 17th of May in collaboration with the administration of the college through its Gramin Mahila Kendra at Doigrung. The workshop was conducted with the objective to develop an understanding concept on gender and existing norms of masculinity and femininity and to understand how gender inequalities lead to violence against women and girls in private, public and work spaces.

Conducted by Nilanju Dutta and Rashmirekha Bora from the Assam team, the workshop essentially introduced concepts of gender, masculinity, femininity and gender based discrimination to the students of 12th Standard who, it became evident from initial interactions, where confused about the sociological meanings and implications of these terms. Anecdotes, quizzes and group activities were combined in the Workshop to create an atmosphere of healthy debates and self reflections.

Through the course of the workshop, the students reiterated stereotypes about gender roles. For example, women were supposed to take care of domestic chores while men went out into the world, jobs that earned substantial income where masculine but it was okay for women to to small scale jobs, etc. In the end however, a few students recognized that their categorizations were questionable and that they should rethink social standardization of gender roles that they had been made to internalize from early childhood.

This new intervention by NEN furthered the organizations geographical reach and initiated a new process with a group of youth that has the potential to effect the larger community in the long run.