Building Rural Women’s Resilience in the Wake of COVID-19 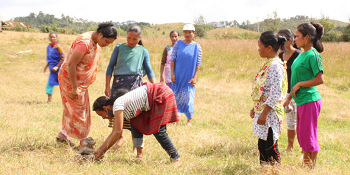 All work and no play makes Jack a dull boy, given the phrase a thought we at North East Network observed International Day for Rural Women with a whole lot of fun and games. We understand that rural women have contributed amassed to society and we made sure that we appreciate their spirit and dedication by celebrating this joyous day with them. With the alarming rise of domestic cases during the lockdown these women also took the opportunity to raise awareness on “Violence against Women and Children’ through infotainment which they directed and performed by themselves. The moment was propitious, and their efforts met with success.  It was indeed an exuberant day with memories to treasure and they indeed more than anyone else deserved this one day of escapism.

International Day for Rural Women (IDRW) is celebrated to recognize the critical role and contribution of rural women in enhancing agricultural and rural development, improving food security, and eradicating rural poverty. Rural women are the key agents for development and play a vital role in the achievement of economic, environmental, and social goals that are required for the country’s sustainable development. Empowering them is essential not only for the wellbeing of individuals, families, and rural communities but for the overall economic productivity, given that 18% of Indian GDP comes from the agricultural sector employing 50% of the total workforce which are highly engaged by women (Agriculture Statistics at a glance2018).

According to Census Data 2011, Meghalaya has more women in the rural area with a total number of 1,177,179 and urban women constitute about 297,878. 75percent of women in Rural Meghalaya are engaged in agricultural activities and in the wake of the Covid 19 pandemic when livelihood activities were suspended, women farmers were adversely hit. This year’s theme also speaks about rural women’s resilience during Covid 19. Rural women are considered custodians of nature, keepers of traditional knowledge and are the key agents to food security. But many times rural women see themselves as less productive or less literate to be regarded as equal as their female counterparts in the urban areas or to male members in their community not realizing that they are the backbone of the rural economy.

NEN observes International Day of Rural Women every year to appreciate and celebrate rural women’s contribution to society at large and this year we organized a traditional game called Maw-poiñ to engage with women in celebrating their own day with fun and frolic. Four teams were formed and the winner was presented with a small token of appreciation. How often do we see women participating in leisure activities, almost never?