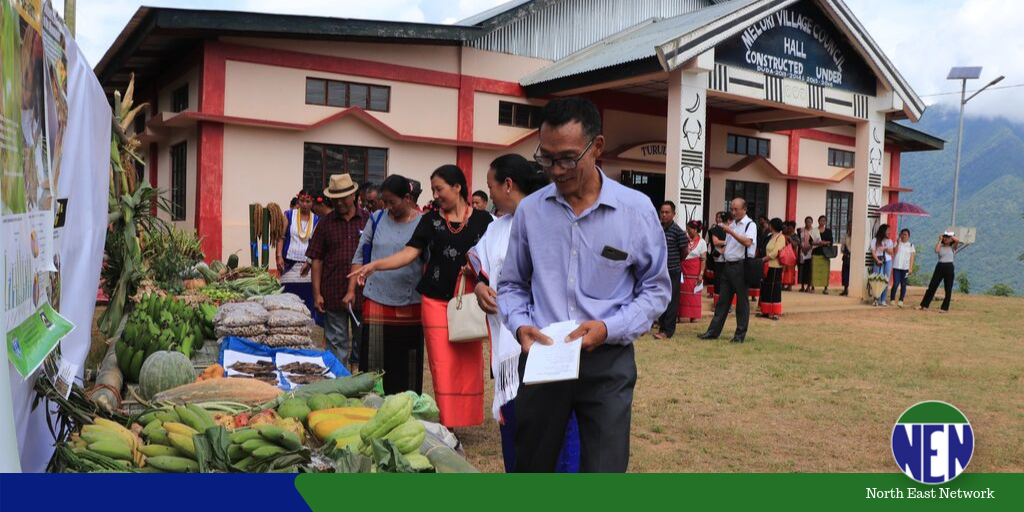 Food security is emerging to be one of the most challenging threats of our times and we believe the solution lies with indigenous communities and in traditional farming. Our Biodiversity festivals have come to signify exactly this. Held this time at Meluri in the Phek district of Nagaland, the festival was celebrated to acknowledge the biodiversity of the region with an emphasis on strengthening community resilience towards attaining food and nutrition through collective participation.

Ms Seno Tsuhah greeted the participants and highlighted the objective of the festival which was to address the issue of biodiversity conservation for food and nutritional security. The special guest stressed on the need for local production which is organic and to end the dependency for external foods. He also encouraged farmers to adopt the sustainable practices in the fields to protect the fertility of the soil which is crucial for food production. Ms Zhitho Phoji, President of the Women society Meluri village shared on the cultural importance of millets. Millets are still being largely cultivated by farmers of Meluri village where it has considerably declined in other villages. All the four solidarity speakers emphasised the issue of climate change and the subsequent need for biodiversity conservation, the important role of women in addressing food and nutritional securities, issues and challenges with regards to the natural resources, decreasing wildlife population etc. The community leaders present also assured extending of support towards the larger goal of biodiversity conservation.

Special highlight of the event was the biodiversity display, farmers market, seed exchanges and the traditional food pot luck served in the most indigenous style. Being conscious about environmental concerns, the event was organised by sourcing almost everything from locally available resources such as bamboo cups, spoons, containers, foldable leaves etc except for the millet packages which were distributed as a gift to some participants. As a memoir of the festival, the women collective of the host village Meluri made all possible effort to gift every participant with produces from their collective jhum field which they have started this year- a pack of millets for special invitees and a bundle of yam for women participants from the other five villages. Other significant highlights include folk dances by Meluri & Akhegwo and folk melody by Shatuza & Meluri women group. The festival ended with blessings by Rev. Rumatho Nyusou, Executive Secretary of the PBCC.