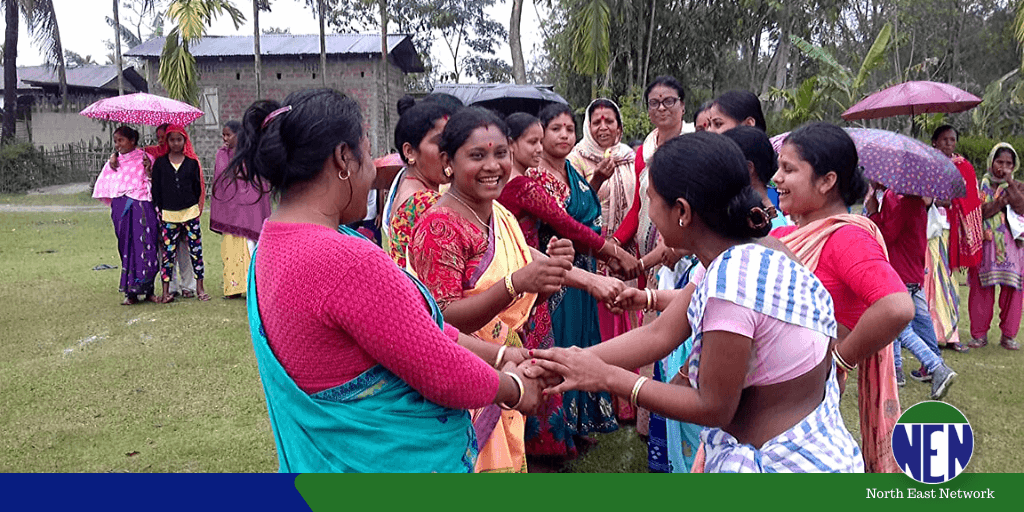 This Annual Day that celebrates women in all their diversity, struggles and achievements has been extremely important to North East Network over the years. We use it as an opportunity to connect with the multitude of communities that we work with both in urban and rural spaces, recognize them, and hold dialogues on burning issues that plague women in general and those of the North East in particular.

Focussing on ‘I am Generation Equality: Realizing Women’s Rights’, we organized a series of sports competitions for women in Darrang, Kamrup, Dhemaji, Golaghat and Udalguri districts of Assam bringing together inter-generational women: mothers, daughters, mothers-in-law, daughters-in-law and the likes. With sports like relay races and kabbadi, we attempted to strengthen bonds and create solidarity among them. The participants thoroughly enjoyed themselves and discovered a new form of camaraderie with each other. One mother-in-law said, ‘I could never imagine playing with my daughters-in-law as we have always been engaged only in household chores post marriage.’ In one district, we were acknowledged by the headmaster of a High School in providing the women of the community a break from their routine housework.

The games saw the participation of over 500 women, men, children, students, teachers and heads of local bodies across districts.

In Golaghat, we also held an awareness session through our Gramin Mahila Kendras in collaboration with the One Stop Centre where representatives from the District Legal Service Authority and the Deputy Commissioner office spoke on issues of gender-based discrimination and violence against women prevailing in society.

In Guwahati, we collaborated with women’s groups like the Asom Mahila Sangha, All India Democratic Women’s Association and Sadou Asom Pragatisheel Nari Sanstha to address a gathering of over 100 people on the significance of the day and recent issues of women and their rights in the State. Anurita Hazarika, our State Director spoke on the importance of the theme ‘generational equality’.  She then said that it was the state’s responsibility to ensure equal pay, equal share for unpaid care and domestic work, end sexual harassment of women at workplace, mitigate violence against women and girls, ensure proper health care services for women that respond to their needs and their equal participation in political life and in decision-making processes.

Garima Kalita, a prominent academic and a retired professor from Cotton University spoke about the position of women in India and Assam off late, a cause for grave concern. Rashmi Rekha Borah from NEN recited two poems emphasizing women’s struggle and resistance against patriarchal society and oppressive state mechanism.  Representatives – Nilanju Dutta (NEN), Asomi Gogoi, Gitanjali Sonowal, Madhuri Devi and Sima Biswas from the various women’s organisation presented their demands to State Government on addressing the violations to women’s human rights.

According to the National Crime Records Bureau’s Crime in India Report 2018, Assam ranks 1st in terms of crime against women and the recent incident of rape and murder of a young girl in Gohpur, Assam is simply a case in point. Considering this, the group of women have put forth that the Government of Assam must

IWD 2020 was quite a day at NEN in all our areas of operation and we stand in solidarity with the international community to continue to utilize the date and the spirit of the day to further the rights of indigenous and marginalized women in North East India.