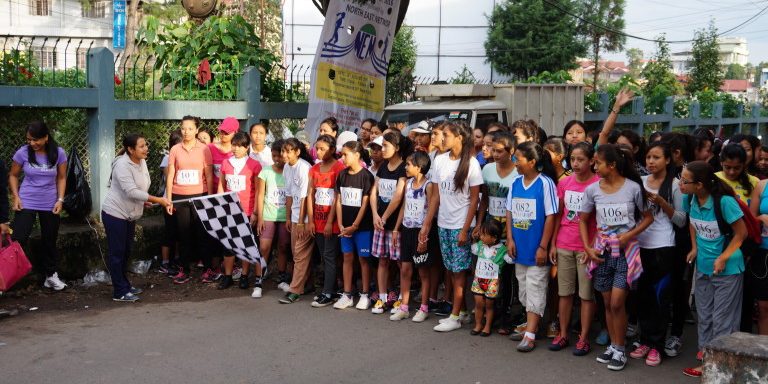 In observance of International Women’s Day (26th August, 2016), North East Network organized an “All Women’s Marathon”. This was the first of its kind Marathon in the State. It was also organized at a time when women in sports were given much recognition after the good performance of India’s women representatives in the Olympics. Breaking the notions that sports is a male dominated activity, the Marathon called on women and girls of all ages to participate.

The Marathon started with registration which started at 5:00 AM, followed by a welcome speech from Ms Balarisha Lyngdoh. Ms Ivereen Warjri, Mission Director State Resource Centre for Women, flagged off the marathon from Madan Iewrynhep, Nongthymmai, Shillong.
The route of the Marathon was from Madan Iewrynhep (Fire Brigade Ground) through Dhanketi, Laitumkhrah, Lower Lachumiere, Governor’s House, AIR road, Bivar Road till the final stop at Polo Ground. 150 participants took part in the Marathon with youngest participant being a 4 year old girl . After the Marathon, Ms Rebina Subha, Member of the Meghalaya State Commission for Women gave a small speech by congratulating the participants as well as the whole team a successful programme. She stated that women’s equality is not just a subject on the right to vote but there are many things that women continue to suffer discrimination and violence on. She concluded by stating “Let’s celebrate women’s equality day by ending all forms of discrimination against women and girls everywhere”. After the speech the prizes were distributed to the winners of the marathon followed by light refreshments.