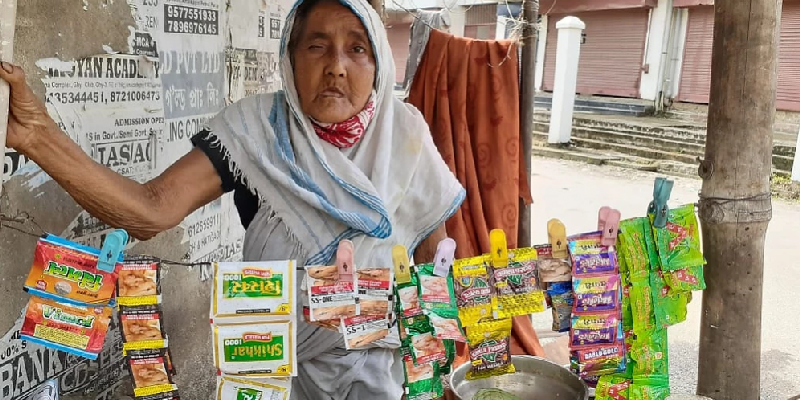 Anurita has been associated with the North East Network (NEN) from 1995, beginning her stint with one of the earliest women’s rights organisations of northeast India as a student volunteer and now is the State Director of Assam.

She has been vocal on women’s issues by publishing fact sheets and reports to influence policy makers and also public opinion on issues of discrimination and abuse. At NEN, she has been instrumental in building women’s leadership at grassroots level by setting up women’s centre in villages called Gramin Mahila Kendras. She started connecting women survivors to livelihood issues which is now known as Saneki Weaves .

Anurita has a Master’s degree from Gauhati University and also attended a Women’s Human Rights course at the University of Oxford. On the side she likes travelling and gardening.

Dasoni Aita doesn’t know her age as it was never important to document one’s age earlier.

Dasoni says that she could probably be 100-years-old but still feels fit enough to look after herself. All she remembers is coming to Guwahati as a domestic worker when she was about 12-years-old. She married early. Her husband was a driver who later on abandoned her with four children to take care of all by herself. In order to meet the medical expenses of her two sons, who unfortunately died of cancer and tuberculosis, she sold off the small plot of land she had somehow managed to buy with her savings as a daily wage earner.

Her daughters married early and have several children. They do not visit Dasoni anymore although they live close by. One of them is a single mother who sometimes come asking for money.

With age catching up, Dasoni could no longer find daily wage as it was physically impossible for her to do manual labour. About five years back, she opened a small paan shop by the road side. She earns Rs 20 to Rs 100 in a day.

Dasoni could not understand why the lockdown has been imposed. All she knows now is that one has to wear a mask to walk or work on the streets. The lockdown period has been difficult for Dasoni, as her daily earnings have started to dwindle. The little savings she had is also getting exhausted. She has been surviving on charity from neighbours and schools in the neighbourhood.

She has aches and pains in both her legs, needs an eye operation and is also hard of hearing. She was hoping to repair the leaking roof of her tiny hut before the onset of monsoon.

Dasoni says she does not want any more “bandhs” as it makes it difficult to earn. She is puzzled by the extraordinary situation.

Photo series co-ordinated by Banamallika Choudhury of Women’s Leadership Training Centre (WLTC) and Sampurna Das a doctoral student at the Department of Sociology, Delhi School of Economics, University of Delhi.

WLTC is a feminist organisation based in Assam, working towards gender and social equality. It focuses on enhancing women’s capacities and creating space and opportunity for women (cis and trans) to take decision-making and leadership positions within families, communities, in governance and politics.