COVID-19 Pandemic and the Call of Duty. 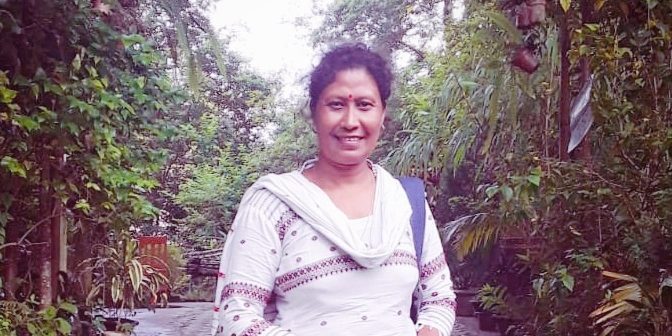 The COVID-19 pandemic and the subsequent lockdown has undoubtedly brought down unimaginable hardships on people belonging from all walks of life. Junumoni, hailing from Kamrup, Assam, who also works as a Community Mobilizer for North East Network, has also faced various challenges as a result of the lockdown. The lockdown meant that now she would not be able to provide direct counseling in Gramin Mahila Kendra to the aggrieved women, and would not be able to be in direct contact with the weavers working under Saneki weaves. Community meetings had to be put on a hold, which meant that the safe space for women to come forward and discuss their issues was also unavailable for the unforeseeable future.

Junumoni has been receiving many calls from women in distress during this pandemic. Women have been facing physical, verbal, sexual, and emotional abuse at home, much more than before the imposition of the lockdown. Sexual abuse has skyrocketed in astronomical proportions during this lockdown; the most common complaint has been of sexual harassment that women have been facing at the hands of their partners. Sometimes, the husbands even end up physically assaulting their wives because of their refusal to have sex. In addition to sexual and physical abuse, these women are now also experiencing mental trauma. . “One cannot even imagine what must be her mental state, as soon as she enters the room. Spending 24*7 with their abusive husbands has been nothing short of a nightmare” Says Junumoni.

Junumoni has been providing help to the aggrieved women through phone calls and has been counseling them to the best of her ability and to the extent that the current situation can allow. However, Junumoni has done as much as she can and also gone to the farthest end to help these women, contacting all concerned authorities. Such efforts are bearing fruits, as one case has been lodged in the police station during the pandemic, against a man who had been sexually abusing his wife. The woman was given access to medical facilities and was relocated to her natal home. Junumoni says that apart from violence, women have been facing various other difficulties too; women are not getting access to sanitary pads, women who need medication to manage their menstruation are not being able to go out and buy medicines.

A local health worker from the Community Health Centre had contacted Junumoni to discuss the precautions and safety measures to be taken to protect oneself from the CoronaVirus. During that discussion, the need for production of masks came up, as the health worker expressed that they had started to run low on masks. Upon hearing this, Junumoni contacted NEN office and talked regarding the matter with the Programme members; she was given the green signal to go ahead with it. Junumani proceeded to get in touch with a survivor of Domestic violence; that she had been in contact with for a long time and gave her the responsibility to stitch the face masks. The Domestic violence survivor was provided with 6 meters of cloth and she was able to produce 49 pieces of Masks. The masks were distributed to the Community Health Centre.

Junumoni had also taken up the responsibility to distribute ration to the people in her locality and village, as a part of NEN’s relief efforts for the COVID-19 pandemic and lockdown. Rations were distributed in 3 phases during the lockdown. She was able to contact people via phone calls and through the members of the support group in various villages. For the first phase, she reached out to women affected by domestic violence, women who have children and were out of work, women below the poverty line, etc. and distributed rations to 20 those affected women. She managed to reach out and distribute ration kits to 30 women who were survivors of domestic violence, young children at home and women with disability who had no source of income and with no previous help received from any organization. For the final round, Junumoni contacted 100 more households and women who were connected to the organization/support group but had not received any help.

Relief materials were distributed in villages like Sarpara, Botiapara, Uporhali, Batorhat, Muslimpara, etc. Junumani had provided relief materials to a total of 150 households and individuals all throughout the lockdown. Junumoni also played the role of a master trainer in a recent project “Informal women’s response to COVID19 pandemic” undertaken by NEN. This project aimed to launch an aggressive campaign to spread awareness regarding corona virus, psychosocial care, sexual and reproductive health and prevention of GBV (Gender based violence) over the phone. Junumoni was able to reach 140 women in a span of 7 weeks, which was commendable despite the lockdown being practiced rigorously.The lockdown had thrown several hurdles in Junumoni’s way but this has not stopped her from playing a tremendous role in providing help and counseling to the women in need  and  encouraging the weavers of Kamrup District during this pandemic. She is a leader who led with integrity and continued striving to develop trust among weavers. She has been working concurrently with weavers and on domestic violence cases relentlessly. She kept distributing yarn to weavers despite these challenging times so that these women can continue to have access to their income and become less tolerant to abuse.  One weaver had also taken the initiative to stitch 25-30 masks from Gamusas and had distributed them around her locality and also in the health centre.

Junumoni was able to help the community, spread awareness about the pandemic, all while also providing a chance to a survivor of domestic violence to earn a livelihood, truly fulfilling her duties even in the face of adversities.

Observation of International Day of the Girl Child , Assam
January 20, 2023

Interface and workshop on Protection of Women from Domestic Violence Act, 2005 and Sexual Harassment of Women at Workplace (Prevention, Prohibition and Redressal) Act, 2013 , Assam
January 20, 2023

Women Raise Voice To Assert their Choice- Unite to join the 16 Days Activism to end all forms of gender-based violence against women and girls (25 November to 10 December 2022), Assam
January 20, 2023

Developing a Gender Equitable Perspective On Laws for Women – A Workshop for District Lawyers, Assam
January 20, 2023
Go to Top
error: Content is protected !!