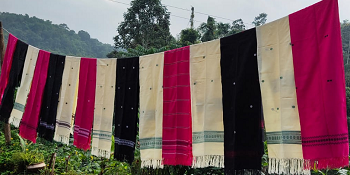 Presenting to you the collections of Thir-La-‘Sai. Despite it all, the women weavers of Ri-Bhoi District of Meghalaya were dedicated in promoting their weaving skills, and we are glad to showcase to you the end products of their dedication.

“THIR- LA-SAI” Weaves comes from the Khasi words which translate to “ Spin your own yarn”.To break it down further “Thir” justifies as Spin and “Sai” which comes from the word “Ksai” Thread or Yarn. Thir – La- Sai Weaves aims to promote the local weavers in Meghalaya by helping them create a sustainable livelihood thereby preserving the traditional skills of the weavers.

As an outcome, a capacity building on Women’s access to ESCP rights for women’s groups was conducted aiming at understanding the status of rural women in accessing their rights and entitlements as well as strengthening women’s group to promote collective action to counter VAW and children in the village.

Considering that the district is culturally and traditionally rich in practicing indigenous weaving and bamboo crafts, this, in turn, created an opportunity for NEN to revive traditional weaving culture in Meghalaya and preserve the ethnic essence of the state through a project entitled “Enterprise as an Economic, Social and Cultural Rights of Rural Women in Northeast India” with its long term goal of economic empowerment of rural women in North East India alongside upholding of their social and cultural rights, through sustainable livelihoods linked to the preservation of their traditional practices of weaving, cultivation, and collective work culture.