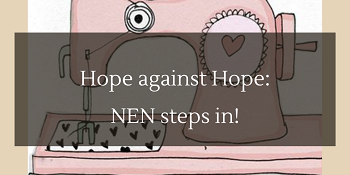 Hope against Hope: NEN steps in

The coronavirus outbreak was followed by a subsequent lockdown which has affected the entire informal economy including the tertiary sector. Women workers in this sector have been the most vulnerable during these trying times. Undoubtedly, this lockdown brought along the loss of employment, growing insecurity, anxiety, and other hardships one could possibly imagine. A strike of this thunder fell on Mamoni, a resident of Jyotinagar, Bamunimaidan, Guwahati, Assam. She was laid off by her master tailor. Her husband who was working in a pan masala factory faced the same unfortunate fate. The couple has a daughter preparing for school board exams and as parents, they could no longer cater to her needs. The family was going through an acute crisis and looking for income to tide over the situation. They were also facing the wrath of their landlord for not being able to pay rent.

Mamoni has always been the pillar of the house that fought against odds in all hard times. The thought of not letting her daughter sleep on an empty stomach kept her going without leaving any stone unturned. In the meanwhile, North East Network had begun an initiative of supporting women affected during the pandemic by distributing dry ration kits. Priyanka of North East Network happened to cross paths with Mamoni and learned about her desperate situation. We as an organization are extremely conscious to address multiple insecurities faced by women who have been disproportionately affected by the pandemic. We conceived the idea of engaging with disadvantaged women tailors like Mamoni by placing orders to stitch masks and we decided to reach out to her. This is an attempt by us to mitigate the impact of the economic crisis on livelihoods.

Mamoni has stitched around 500 masks which have enabled her to save her home by clearing all dues with her landlord including paying off the debts and paying for her daughter’s school expenses. Mamoni is keen and will continue to be involved with us as an organization which she sees as a ray of hope.