Strengthening the Resolve to end Domestic Violence through Stakeholder Engagement 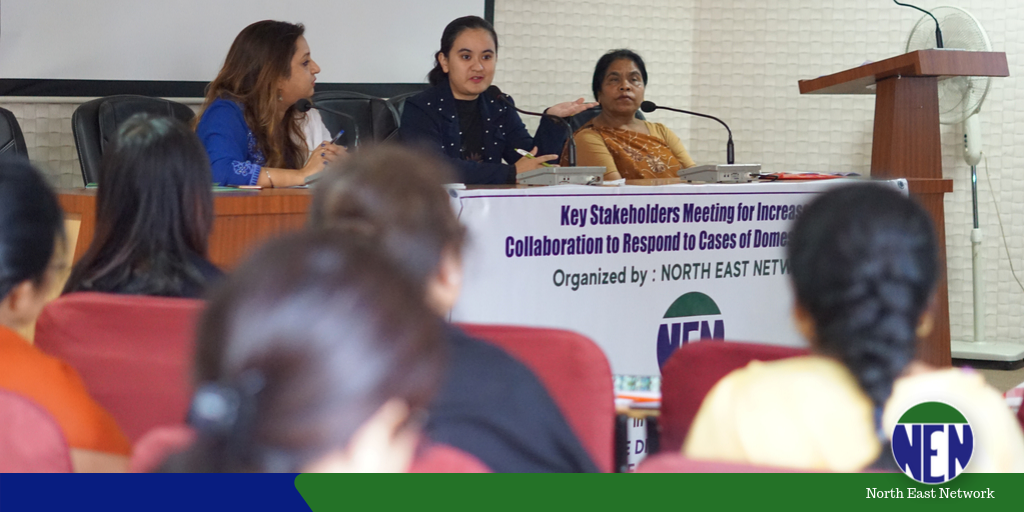 While all forms of Violence Against Women’s Groups are a matter of grave concern, domestic violence is far worse as it is perpetrated within the safety of homes by people who are related to women (intimate partners and/or relatives), who in turn are socialized to endure it in silence. In Meghalaya, available statistics such as the National Family Health Survey conducted in 2015-16 recorded that 28.7 % of women ever married, aged 15-49 years have experienced spousal violence. Iohlynti – our One Stop Centre has registered 390 cases of domestic violence from November 2011 to September 2018. The Meghalaya Police recorded 98 cases of IPC 498A from 2015-2017.

These reported cases are minimal in comparison with other states and through NEN’s engagement with the community especially women, it is learnt that domestic violence is rarely reported as it is considered as a family matter and hence is settled at the family/clan level. Therefore, North East Network (NEN) focuses on domestic violence with special reference to building community and state response for survivors of domestic violence through its various intervention programmes.

In partnership with the Office of DSWO (East Khasi Hills District Social Welfare Officer) we conducted a meeting with key stakeholders under Protection of Women from Domestic Violence Act (PWDVA), 2005 with following objectives:

47 participants attended the programme including the District Social Welfare Officer, Mission Director of State Resource Centre, a representative from Meghalaya State Commission for Women, representatives from Service Providers and other Civil Society Organizations.

The programmes provided a platform to understand the gaps and challenges in responding to domestic violence. Patriarchal mindset of a few concerned officials in their response to violence against women is the first hurdle to tackle DV. Lack of coordination amongst key stakeholders such as the police, protection officers and service providers aggravates the issue. There is a serious lack of infrastructure and finds, no substantive data on reported cases that can be used as advocacy tools on the issue, lack of understanding on the PWDVA, Lack of livelihood opportunities, lack of manpower in terms of counsellors, caseworkers and others, customary laws that are discriminatory towards women, are among the many challenges that stand our way.

The interaction leads to resolves of effectively documenting cases of domestic violence and creating sustainable infrastructure. The stakeholders came together to organize more such programmes and to file Public interest litigation (PIL), Right to Information (RTI) to improve accountability of concerned institutions. At a social level, NEN strengthened community-based interventions and the network amongst key stakeholders for better coordination and response to survivors of domestic violence.