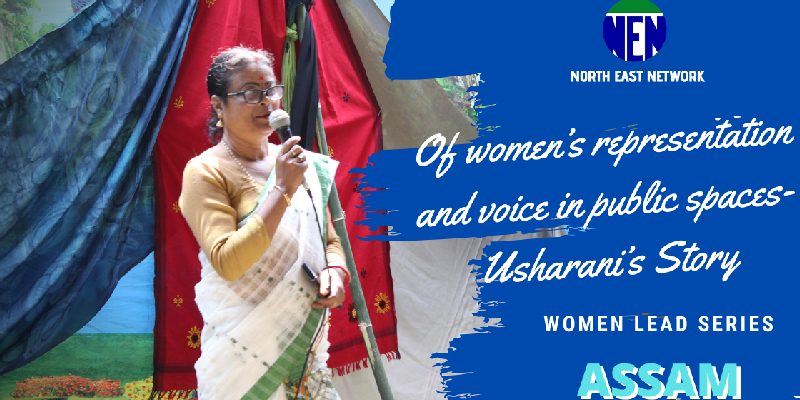 In 2013, Usharani Devi was involved in disaster management and women’s empowerment programmes through an organization in Sipajhar village of Darrang district in Assam. A mother of two and wife to a man who did not take her work seriously, she had always wanted to do something that would further the rights of the women in her community. When North East Network approached her that year to assist in conducting a Survey on the Representation of Women in Grassroot Governance structures, she had no doubts about coming on board.

Since then, Usharani has only grown from strength to strength. When she discovered that thanas had become unsafe for women as the police too undue advantage of their vulnerability, she facilitated NEN’s advocacy for the inclusion of more women personnel in the thanas. This she followed advocating for increased women’s representation in Village Defence Parties. Succeeding in these campaigns gave Usharani the much-needed confidence that years of suppression by patriarchy had stripped her of.

Her association with North East Network as a social worker over the years has given her a support system among other things. She is now part of a diverse group of women who however share her desire for an equal world. She claims that agreeing to travel through NEN was a turning point in her life. It liberated her from the traumas of her domestic life and gave her the space to be someone who could inspire social change.

When NEN began training ‘Barefoot Counsellors’ in Assam, Usharani was part of the team. She stood shoulder to shoulder with survivors of violence, understood the nuances of the Protection of Women from Domestic Violence Act (2005) and began using it. Women who were deprived, shamed, discriminated and violated by their families could lead a freer life through the interventions of women like Usharani and the smiles that this brought back on their faces strengthened her resolve to go on.

Over the years, Usharani has found her voice, she has high self-esteem and promptly responds to injustice. Her personal transformation has allowed her to raise her daughters to be fearless and independent and protected them from the condescending eyes of her own family and society. A feminist leader in her own right, she beats gender-based oppression every day in her home and on the community

Today, Usharani herself is a member of several public bodies. She also runs the Gramin Mahila Kendra established through NEN in Kobeichuba village of Boudoulguri in June 2018 along with fellow counsellor Karabi. Together, they work in 38 villages across 8 Gaon Panchayats.

She is also at the frontline to ensure relief and assistance to the vulnerable during the Lockdown imposed due to the COVID 19 Pandemic. She is leading her team to conduct ration relief for marginalised women and also responding to women in abusive relationships with patience and sensitivity.

‘With passion in my heart and dignity in my stride, I will continue to march ahead,’ says Usharani.