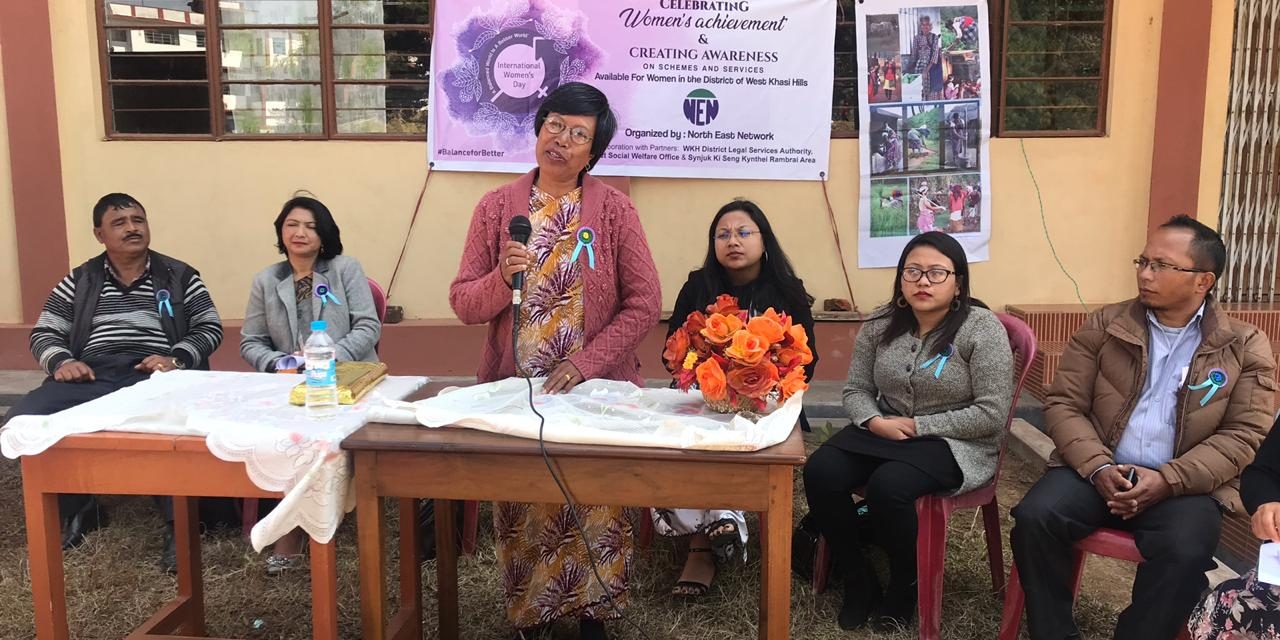 It was an eventful and exciting day for team NEN in Meghalaya with three programs being organised in East and West Khasi Hills, on International Women’s Day on 8th March 2019.
NEN and Shatjingshai Social Service Society, Banuin observed the day through an awareness programme cum debate in Baniun village, East Khasi Hills District.
Participants were made aware about legal remedies available for women with special reference to Protection of Women from Domestic Violence Act (PWDVA) 2005, Sexual Harassment of Women at the Workplace (Prevention, Prohibition and Redressal) Act, 2013 and Protection of Children from Sexual Offences Act, 2012.
A debate on ‘Empowered women in a matrilineal set up: A myth or reality’ was organized with an objective to understand women’s perspective on the status of women in the matrilineal setup. Women from the village participated in the debate.
The programme was held at St. Thomas Hall, Banuin and was inaugurated by the Chief Guest- Smt. B. Ranee, Block Development Officer, Mawphlang Block in the presence of Dr P. N Syiem, Medical Health Officer, PHC Banuin and Lakyntiewriti, Senior Branch Manager of Baroda Bank. A total of 94 participants participated, out of which 92 were female and 2 were male.

In the second programme, NEN with its West Khasi Hills Partners: District Legal Services Authority, District Social Welfare Office and Synjuk Ki Seng Kynthei Rambrai Area observed the day by celebrating women’s achievements. The day was marked with a small felicitation programme for 10 women who have achieved their personal goals against all odds and also the officers from the concerned department had created awareness on their specific roles for women and children.
The programme was attended by 110 women and 6 officials including the Secretary of and paralegal counsellor of DLSA, Officials from DSWO, DCPO and CWC office). The programme not only marked the celebration but also created awareness on the role of the mentioned departments and at the same time created linkages/networks between the women’s collective and the government agencies. It also paved the way for more future collaborative work to strengthen women’s collective through capacity building training.

The third event was held at National Institute of Fashion and Technology. As a result of NEN Meghalaya’s consistent advocacy work on the implementation of Sexual Harassment of Women at Workplace Act, 2013, NIFT organised an awareness programme on sexual violence of women for their student and staff. The programme was conducted by Joy Syiem, Programme Manager, NEN Meghalaya who spoke about gender, power dynamics that lead to violence and remedies available to women. The students were very interactive and posed a number of clarifications. Post the programme, initial talks on conducting gender classes for students of NIFT was discussed.