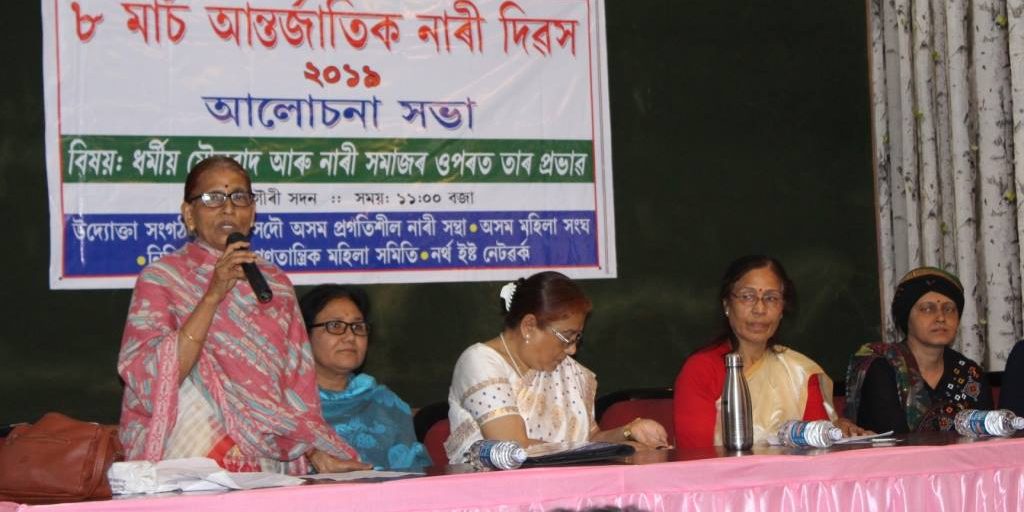 North East Network in collaboration with Asom Mahila Sangha, All India Democratic Women’s Association (AIDWA) and Sadou Asom Pragatisheel Nari Sanstha celebrated International Women’s Day on 8th March 2019 at Gauri Sadan, Dighalipukhuri, Guwahati Assam. This year’s theme was ‘Think Equal, Build Equal, Innovate for Change. The discussion that centred around the topic “Religious Fundamentalism, Impact on Women” was led by Arupa Patangia Kalita, an eminent writer and novelist. She threw light on the aspects of Religious fundamentalism which not only propagates patriarchal norms but also denies equal status to women. More than 70 participants came together for the event. Asomi Gogoi from Asom Mahila Sangha elaborated on the origin of the day which stemmed from the inspiring movements led by women workers in USA and Europe during the 18th and 19th century.
Gitanjali Sonowal from SAPNS, Rashmirekha Borah from NEN and Seema Biswas from AIDWA in their Talk encouraged the audience to work for an equal society by strengthening the democratic process.
Sonapur Mahila Sangha performed a chorus at the event. The audience also paid Tribute to the memory of the Nightingale of Assam, Srimati Dipali Borthakur and the martyred soldiers of the Indian Army at Pulwama.