In observance of the International Day for the Elimination of Violence Against Women on November 25, and the beginning of ’16 Days of Activism Against Gender-Based Violence Campaign’, NEN organised a public meeting at Chizami, Nagaland with participation from the villages Chizami, Enhulumi, Mesulumi , Thetsumi , Sumi, Chizami Town, and Pfutsero Town under Phek district. The program held under the theme, “Orange the World: END VIOLENCE AGAINST WOMEN NOW!” also received support from local village leaders, police and church. 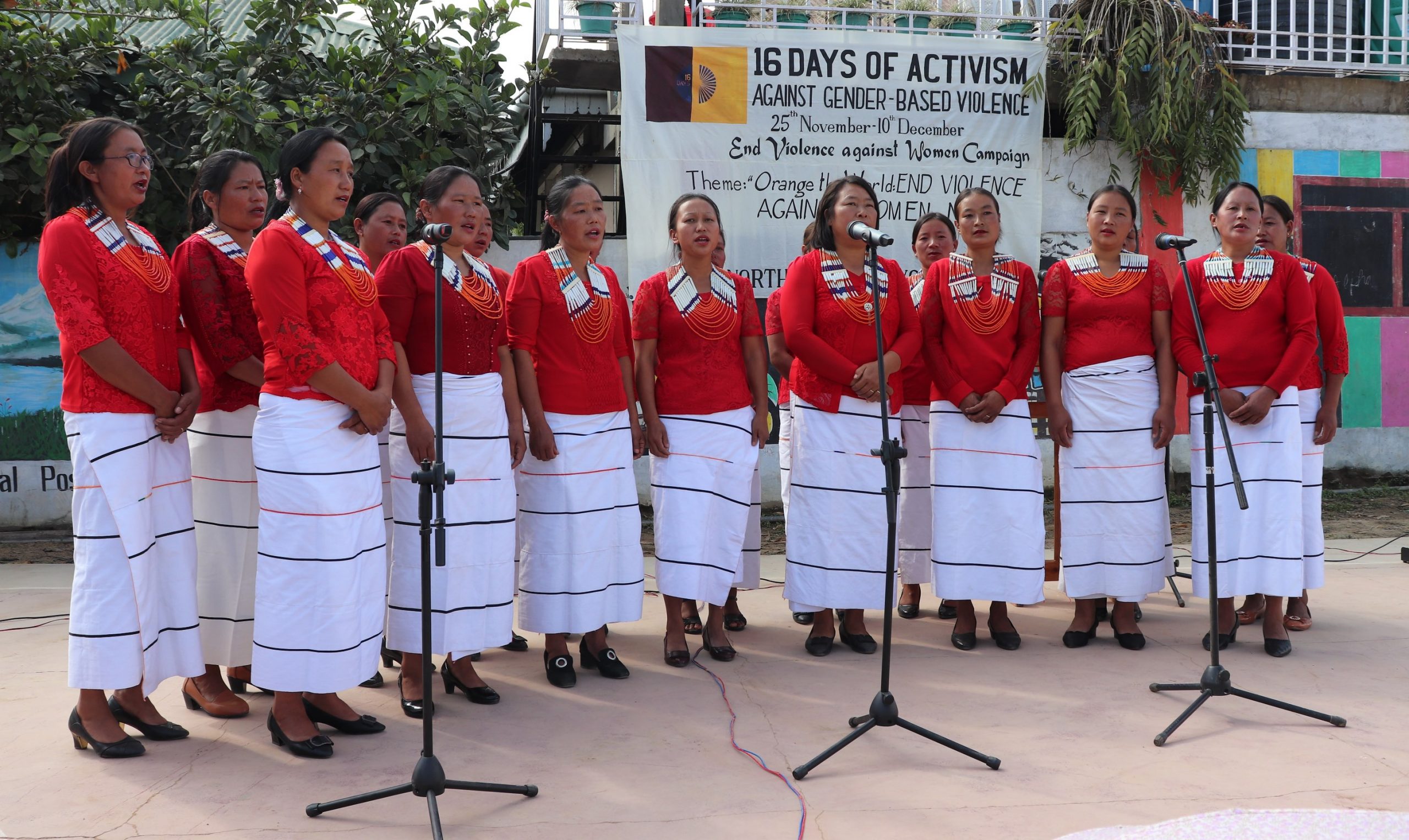 The kick off program was held at the Local Ground, Chizami Village with a total of 194 participants.

Avelu Ruho, Deputy Secretary, School Education, Govt. of Nagaland graced the event  as the Guest Speaker. In her address to the participants, she shared men and women are created to complement each other and not to compete; that gender discrimination starts from one’s home and therefore change can begin from home. 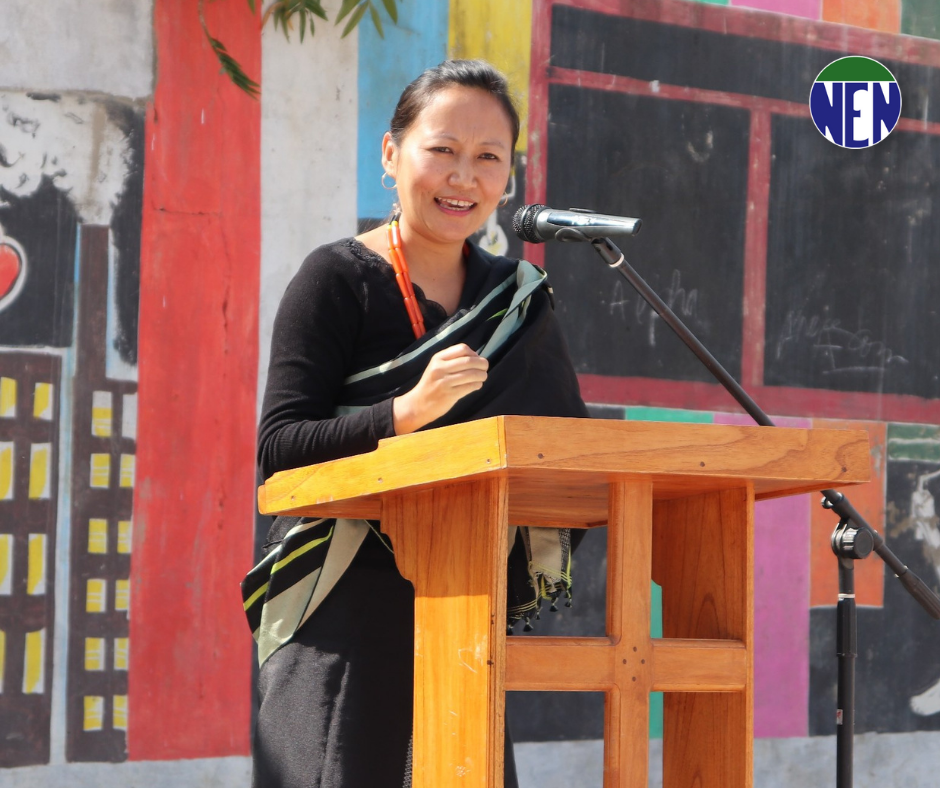 She highlighted the need to make conscious efforts to educate children and build  gender sensitivity,  do away with prescriptive gender roles in families which has led to gender discrimination in our present society.  She highlighted how the traditional, cultural beliefs and norms play a major role in perpetuating violence against women.  Acceptance perpetuates violence. She challenged the women to carve spaces to participate in decision making bodies and must begin by exercising our voting rights.  She also emphasised on the importance of collective effort where women can work together to bring an end to such discrimination. Change will happen gradually with the conscious effort of each woman through one’s own home and families.

Wekoweu Tsuhah, State Coordinator, NEN  gave the welcome speech and opening remarks. In her address she highlighted briefly on the importance of the campaign and further reiterated on NEN solidarity to bring an end to the violence against women. 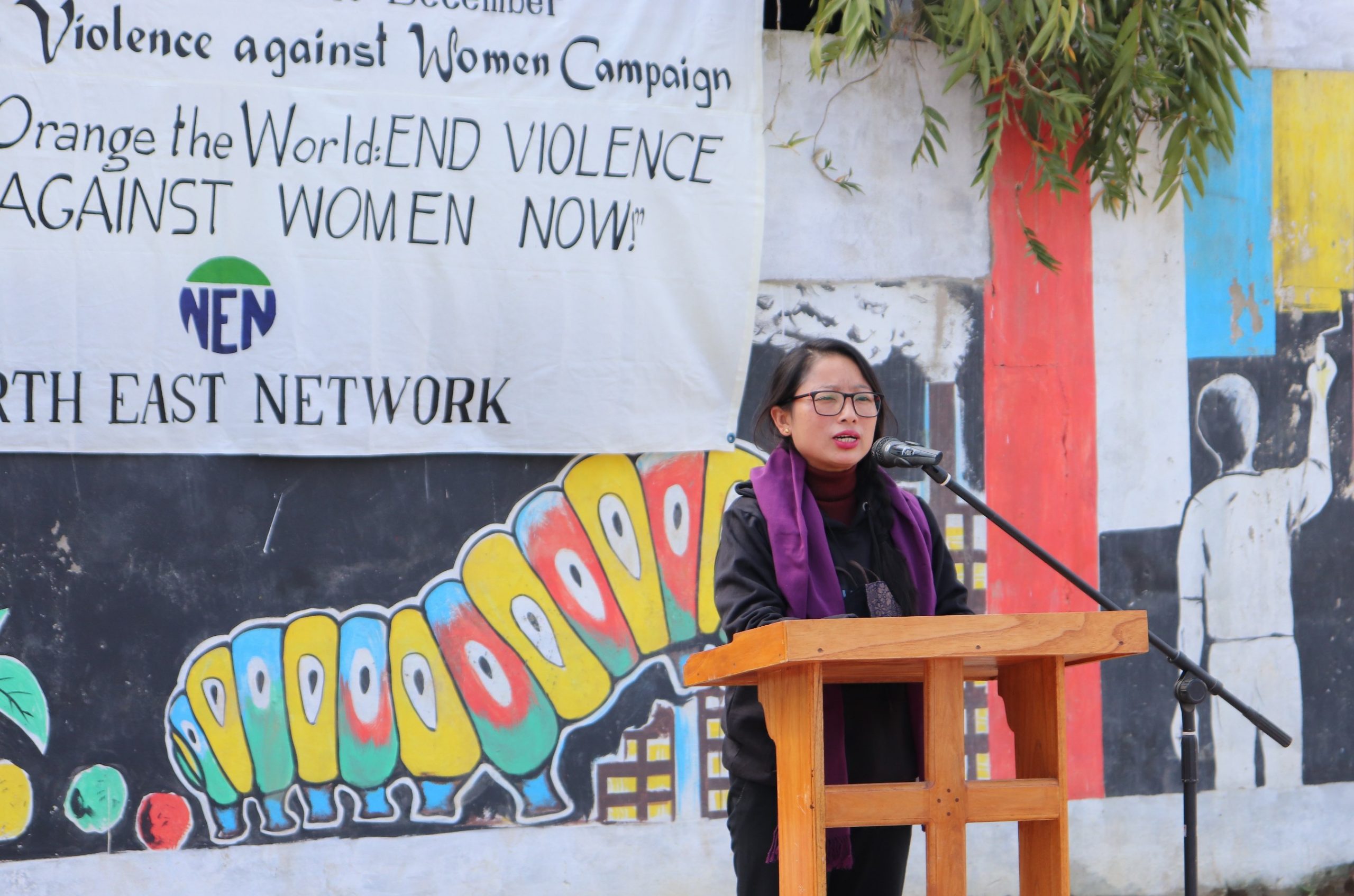 She highlighted the different types of violence that women faced everyday within and outside homes. Re-emphasising on the WHO’s estimate that 1 in every 3 women face violence in her lifetime, which is alarming and remains unreported/ under-reported.  She called on the need to eliminate the culture of silence by speaking up as individuals and as collectives.  With the household being the root of everything, she also challenged each individual to teach children values of love and respect regardless of gender.

The program also witnessed a Folk song  presented by two villages- Mesulumi and Sumi and a role play depicting the discrimination that most women faced in their everyday life by the Chizami Town.

During the period, NEN collaborated with Sakhi One Stop Centre in four districts  across Nagaland, along with women collectives such as SEWA and YBSA  to create awareness among women on their rights and the services available within the system to overcome the injustices.

The Sakhi One Stop Centre was represented by the Centre Administrators and Case Workers and were the key resource persons for the program. The team was accompanied by other team members from their respective districts. The Resource Person shared information on human rights which are also women’s rights, and emphasized on the need to understand the many forms of violence which many women take for granted. The RP also shared instances of ‘Online’ gender-based violence which includes unwanted sexual remarks, non-consensual posting of sexual media, threats, cyberstalking and harassment, and gender-based discriminatory memes and posts among other things. Women and girls continue to face threats via digital platforms and mediums. There is urgent need to create more awareness among children and girls of such harassment and violence.

The RP also highlighted the facilities and services available at the center. The helpline no. 181 is available 24 hours for women in distress alongwith the medical facilities, shelter, legal aid, counseling and information. These centres are available in each district across Nagaland.