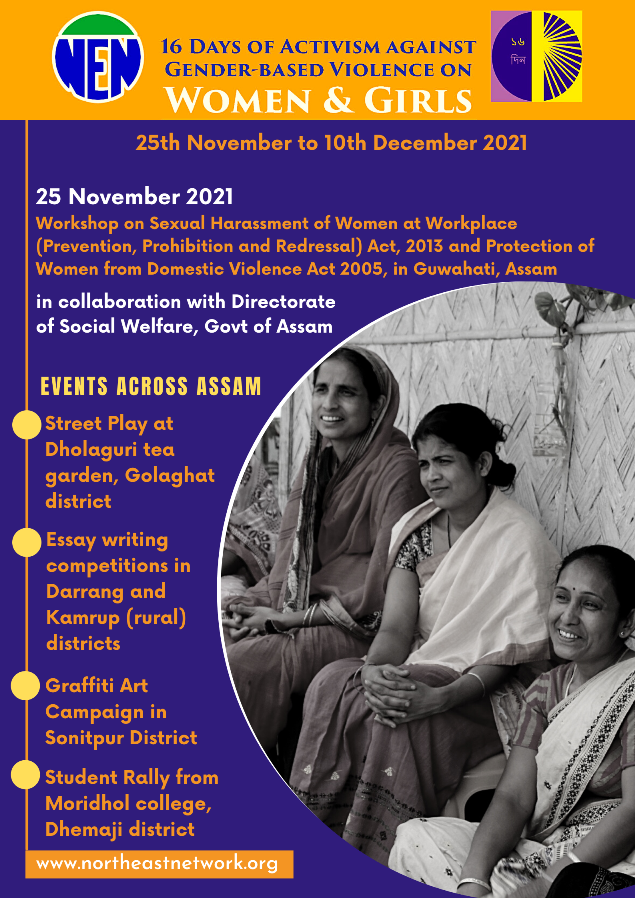 The ‘16 days of Activism against Gender-Based Violence Campaign’ is observed globally every year from 25th November till 10th December. The Campaign seeks to end all forms of violence against women and girls and strives to prevent gender-based violence in private and public spaces.In 2021, NEN organised a series of events in different districts Assam to observe the 16 days of Activism against Gender-Based Violence Campaign. To kickstart the event, a workshop on Sexual Harassment of Women at Workplace (Prevention, Prohibition and Redressal) Act, 2013 and Prevention of Domestic Violence Act, 2005, was held in Guwahati, by NEN Assam in collaboration with Directorate of Social Welfare, Govt of Assam. The inaugural event was graced by Smt. Ajanta Neog, Hon’ble Minister, Social Welfare, Assam, Shri Bivash Modi, ACS, Director, Social Welfare, Assam, Dr. Hemo Prova Borthakur, Chairperson, State Commissioner for Women. Shrimati Manjari Barthakur- Joint Director, SWD, Govt. of Assam and Dr. Monisha Behal, Executive Director, NEN. 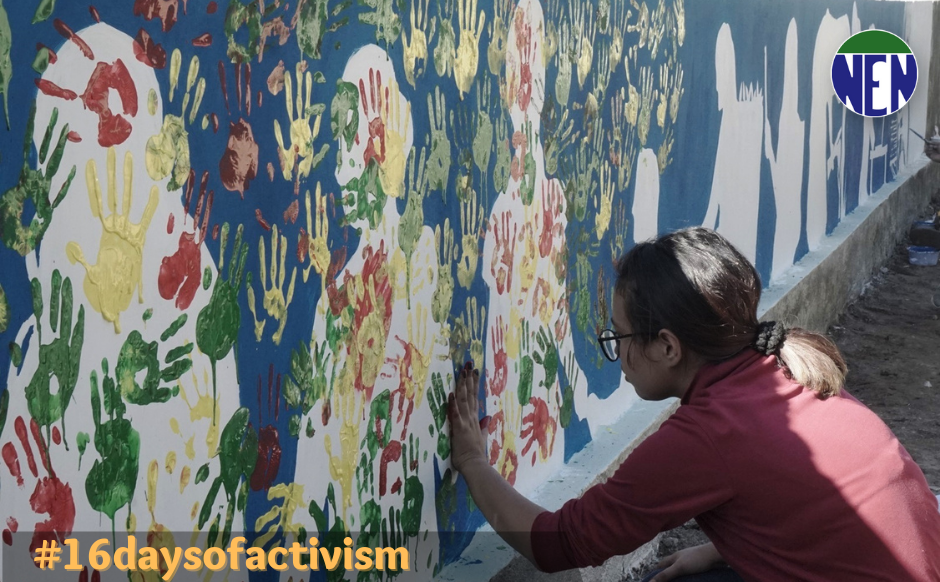 In Darrang, an awareness campaign was held for local women. Prize was distributed to the winners of an essay writing competition at Gramin Mahila Kendra, Darrang on 9th December 2021. An awareness campaign was conducted at GMK, Kamrup as well with 89 participants. Winners of an essay writing competition based on the theme of gender-based violence recited their essays for the audience. The invited guests conferred prizes along with certificates on behalf of NEN.

At Dolaguri TE, Doigrung, Golaghat, a street play on early marriage and VAW was performed by support group members and youths on 5th December 2021. This event was followed by a discussion on early marriage and other forms of gender based violence. More than 50 women, youth, men and children from the tea garden community were present and participated with enthusiasm.

GMK’s theatre group was invited to perform in the campaign organised by district social welfare department of Golaghat on 6th December 2021. They performed a stage play on early marriage and VAW at the Golaghat District Library. NEN team member spoke on gender-based discrimination, VAW and NEN’s relentless effort on addressing and redressing GBDVAW.

The same day, a much needed awareness programe on gender based discrimination and crimes was also held at Moridhal College, Dhemaji. It was a great success for us that the College authorities decided to form an IC committee in the college along with the already existing Women Cell. The event was attended by 86 students and 6 faculty members from various Dept, women’s cell and extension activities committee. 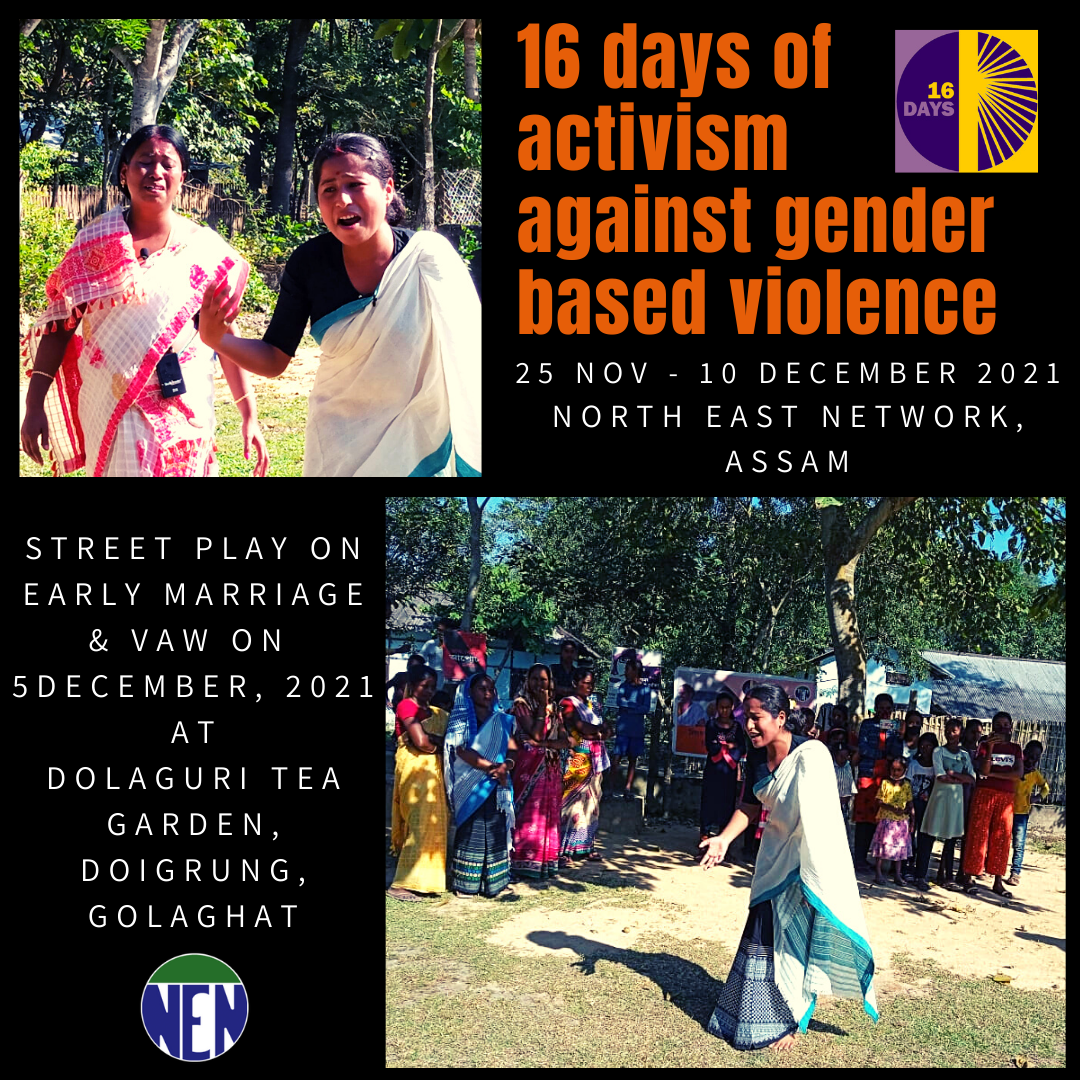 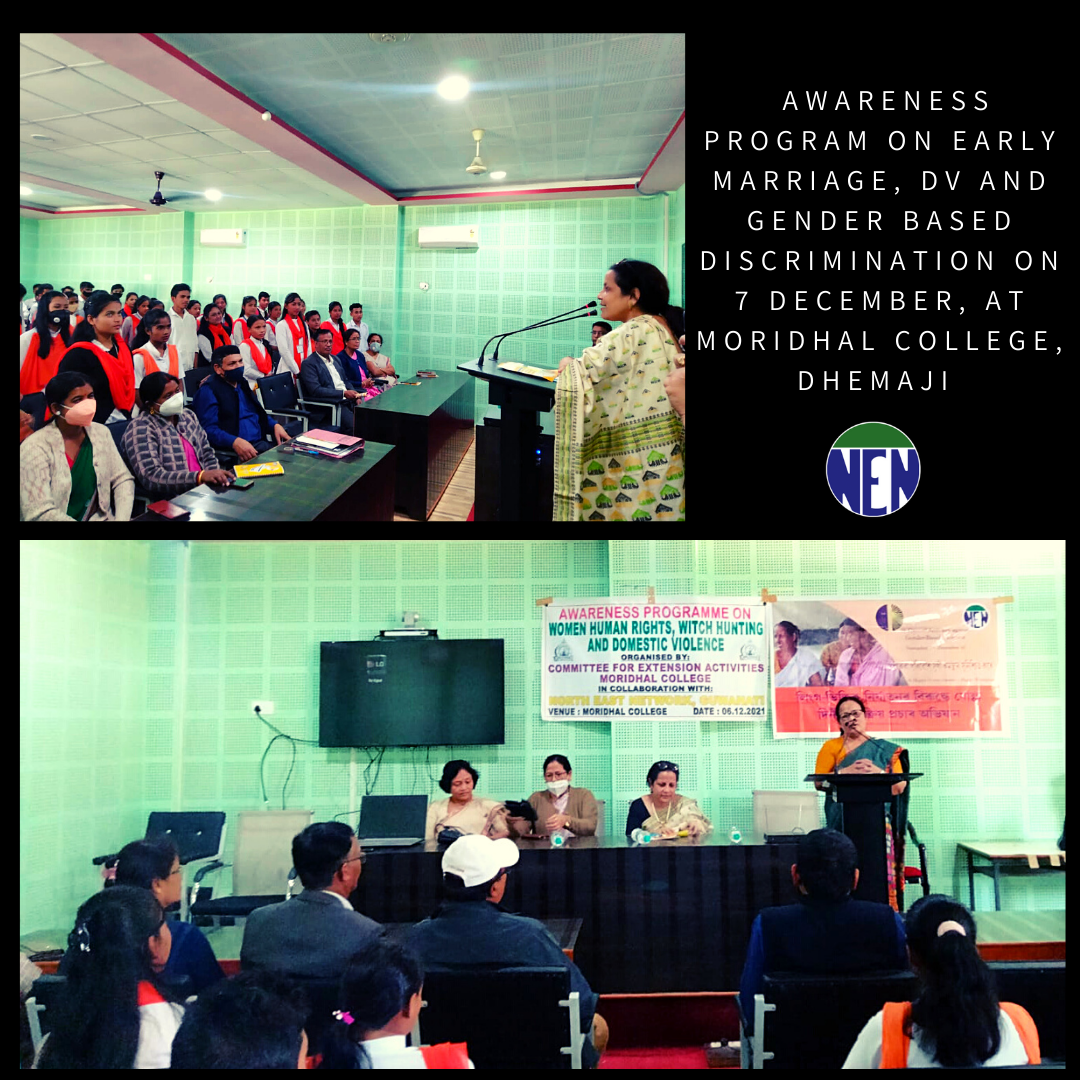 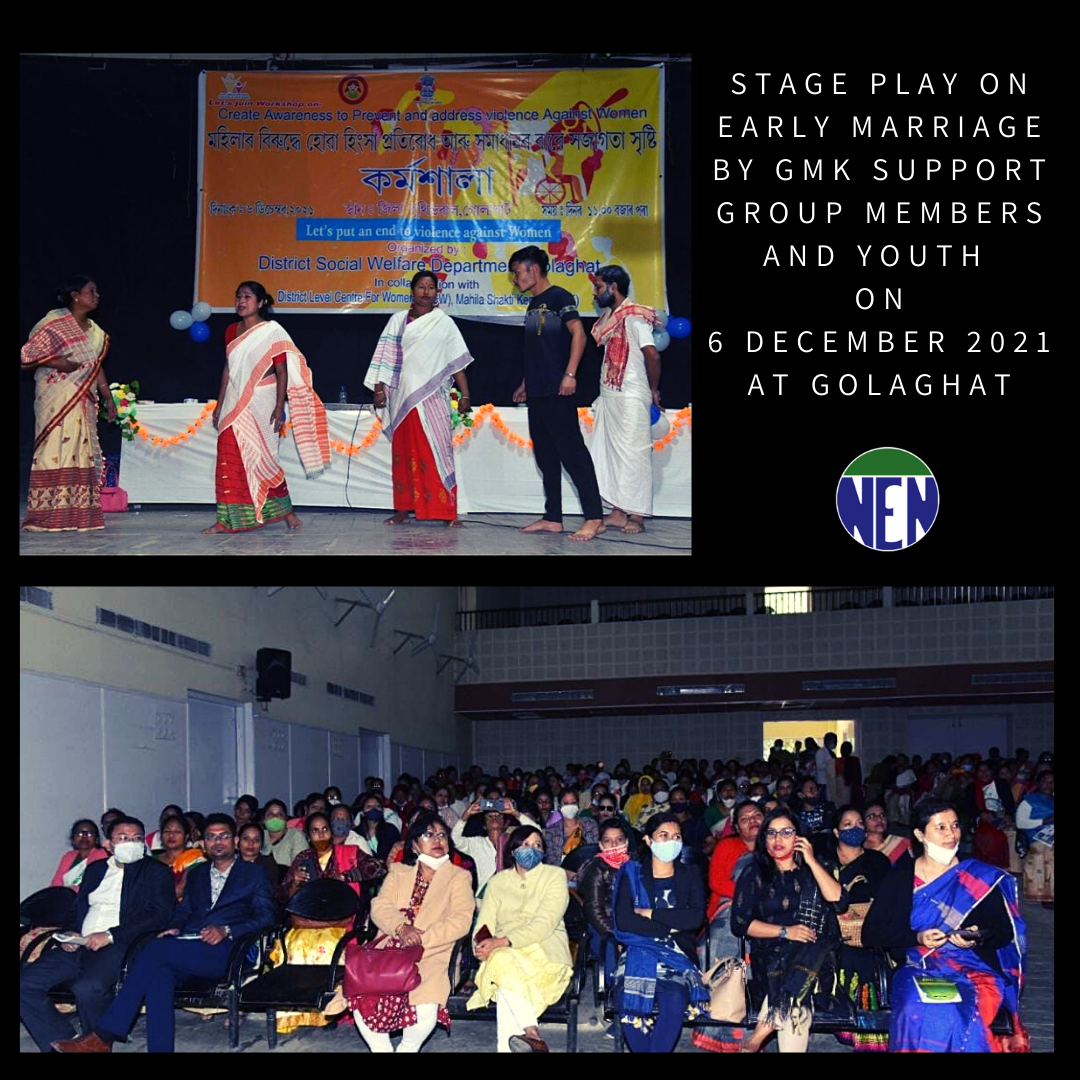 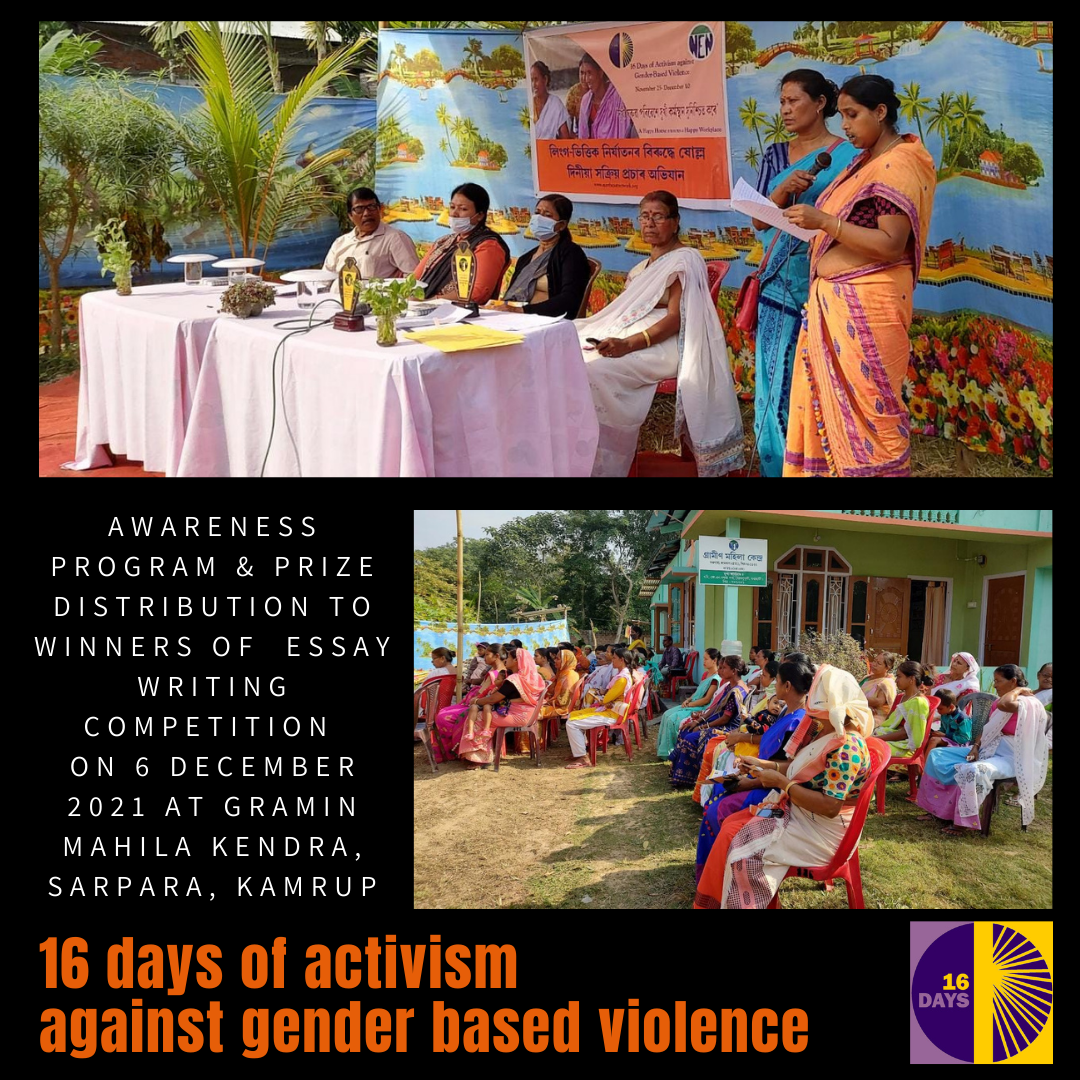