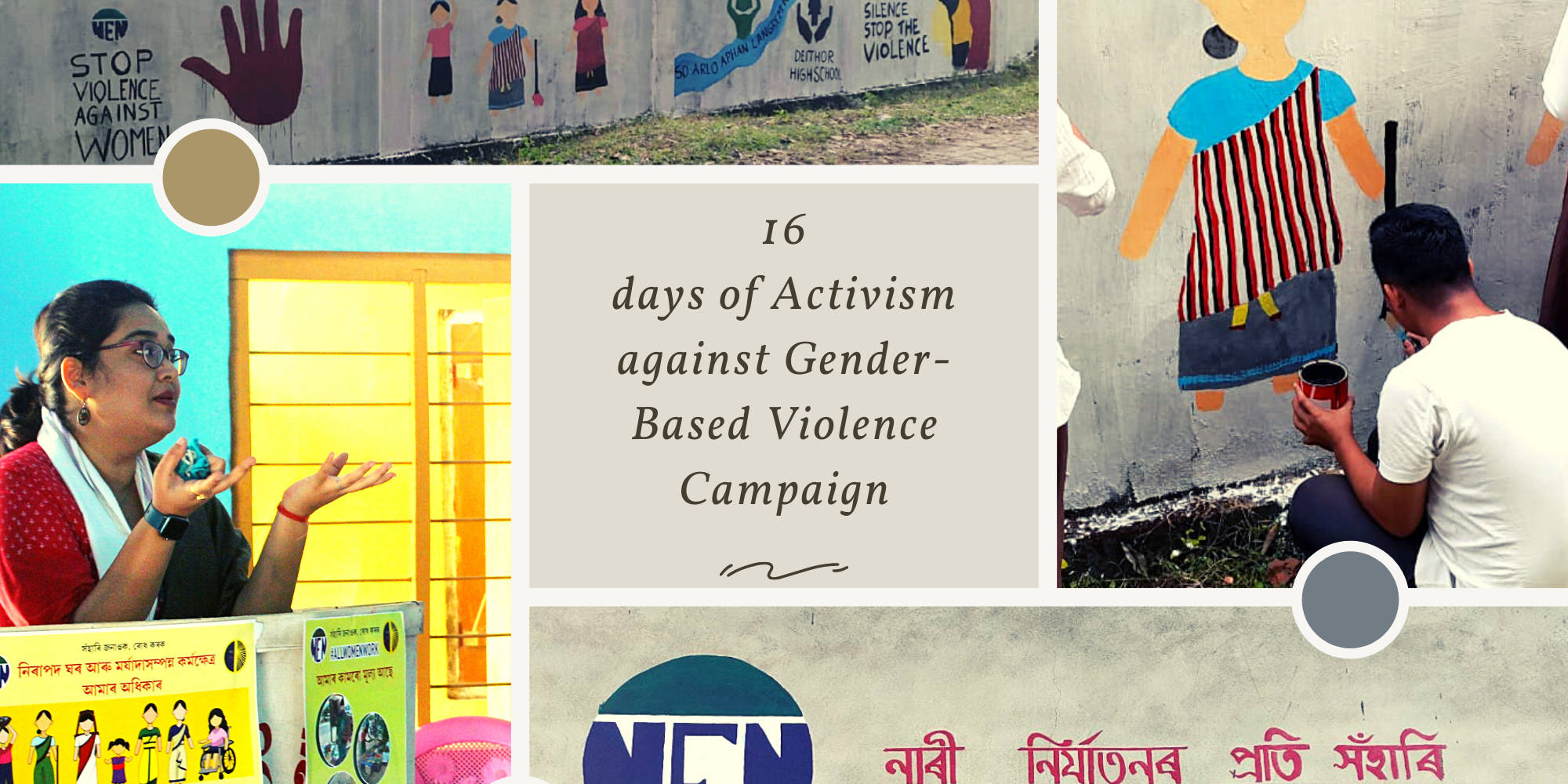 The ‘16 days of Activism against Gender-Based Violence Campaign’ is observed globally every year from 25th November till 10th December. The Campaign seeks to end all forms of violence against women and girls and strives to prevent gender-based violence in private and public spaces. The COVID-19 pandemic has adversely affected the working population around the world, especially women. Therefore, this year the global campaign also focused on rights of women workers in the unorganized sector.

The Campaign for the year 2020 was launched with renewed zeal and enthusiasm by NEN, Assam. The various events were organised in the districts of Darrang, Dhemaji, Kamrup, Golaghat, Karbi Anglong and Udalguri. An agenda outlining all the events was also created and shared on NEN’s social media platforms. Around 180 participants were mobilised through these events. Keeping in mind the current pandemic, all safety measures and precautions were maintained.

On 26th November 2020, under the supervision of eminent artist of Assam, Nikhileswar Baruah, 20 students of Dahali Karka High school, Nahira, Kamrup painted graffiti on the school’s boundary wall. Before painting, students were made aware of the importance of the Campaign by Child Rights Activist Neha Das and Rashmi from NEN. Mr. Baruah spoke on how a work of art, especially graffiti, can be used to spread awareness on various issues amongst the masses.  The theme of the art work was ‘Gender equality and Ending Gender-based Discrimination against Women and Girls’. The event was organised in collaboration with Dahali Karka High school. NEN’s Community Mobiliser Junumoni Das and Associate Community Mobilisers Niva Das and Lalita Mazumdar, support group members and weavers of NEN also attended the programme.

On 27th November 2020, a public meeting on the issue of domestic violence was organized at Kalaigaon, Udalguri. Chief Guest Mr. Gauri Shankar Saha, representative from the District Social Welfare Department spoke on different types of violence including domestic violence and role of Protection Officer, OSC etc. Rashmi from NEN spoke on the history of the 16 Days Campaign. Anurita spoke on issues related to domestic violence and the Protection of Women from Domestic Violence (PWDV) Act 2005. This was followed by a screening of NEN’s film ‘In the Foot of Barefoot Counsellors’ which is about its interventions on DV at the community level. The meeting was coordinated by NEN’s Community Mobiliser Dipali Borah and Associate Community Mobiliser Bhanu Saharia. It was attended by more than 40 women. They expressed that NEN’s continued initiatives on ending violence against women and girls in their communities had enabled them to raise their voice against violence they had been facing all their lives.

On 27th of November 2020, the event at Deithor High School, Karbi Anglong was kicked off with an interactive session with around 50 students (from classes 8 to 12) from the school and local youth on issues such as gender inequality and gender-based violence. After the discussion students and youth came together to paint several walls of the school, all following the themes of ending gender-based discrimination and violence against women and girls, and rights of women workers from the unorganized sector. At the end, they expressed that such an event involving young people had never taken place before and that the experience was new and enriching. The event was coordinated by Meghna from NEN, Vishal Das (an intern from Christ University, Bangalore) and Hirmelin Beypi, NEN’s volunteer from Karbi Anglong. 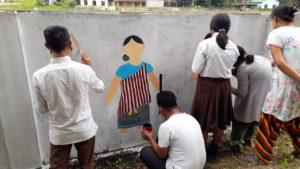 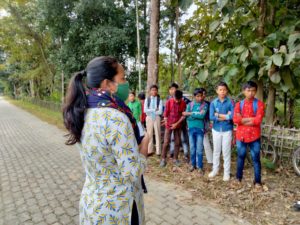 On 28th November, to carrying forward the theme of ‘Ending Gender-based Violence Against Women and Girls’, a group of 12 people comprising of support group members and youths from Doigrung came together and wrote slogans on walls at Doigrung main market in Golaghat. The event started with a brief discussion initiated by Moon Bora, NEN Community Mobiliser from Gramin Mahila Kendra, on the significance of the Campaign and the need to put an end to gender-based violence against women and girls. She stressed on how these visuals and written forms of expression help highlight and draws attention of people towards the issue and brings awareness in society.  Flyers with information on the Campaign were also distributed to the people in the market and nearby households. Associate Community Mobiliser Mayuri Dutta and Meghna, along with Vishal Das also participated in the programme. 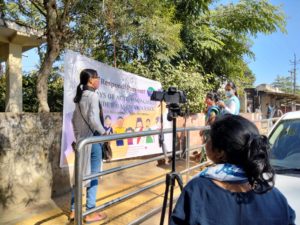 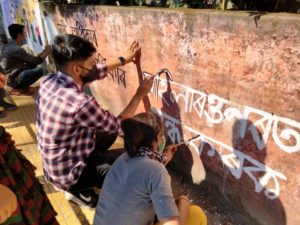 On 2nd December, 2020, Awareness Posters developed by NEN on GBDVAW and rights of women workers from the unorganised sectors were put in public spaces at Dhemaji by NEN’s Community Mobiliser Aparna Chutia and Associate Community Mobiliser Purnima Devi. 10 women and 4 men from Bhoralichuk subcommittee also participated in the event. The group went around Bhoralichuk and put up posters on boundary walls of Bhoralichuk Town High School, police station, 3 traffic points, petrol stations, district court, bus stand, circle office and PWD office. NEN’s flyers with information on the Campaign were also distributed among the local people. 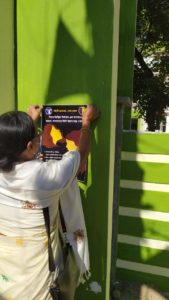 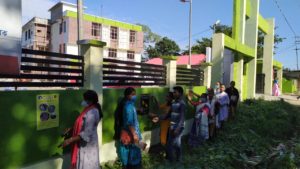 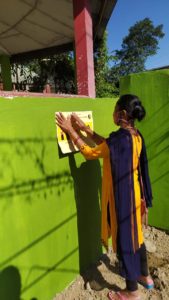 On 4th December, 2020, in Assam’s Daulguri village of Darrang district, NEN initiated a meeting to highlight the bleak outcomes of early marriage. Chief Guest on the occasion was Smt. Pallabi Sharma, Child Protection Officer, Darrang District. She spoke about the different strategies adopted by government to tackle early marriage amongst girls at the grassroots level. Child Development Project Officer, Jitu Deka and Block Coordinator Utpal Bora were present in the meeting and spoke on the different issues faced by young people who married early. President of Gaon Panchayat, Manamoti Deka and Village Headman, Joy Chanda Nath emphasised on the role that the community needs to proactively play to stop early marriage. There were 46 participants who expressed serious concerns about increasing early and child marriages in their villages. Anurita and Usha Rani Devi of NEN spoke about global Campaign and its local significance and emphasised on joint efforts to be made by government and public to address the issue. NEN’s Associate Community Mobiliser Kabita Saharia was also present in the meeting. 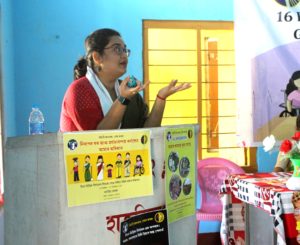 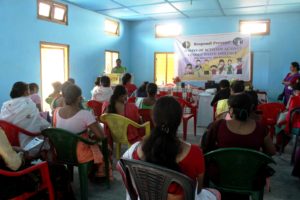 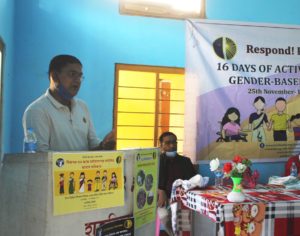