The UN General Assembly has declared 2021–2030 the UN Decade on Ecosystem Restoration – to support and scale up efforts to address the urgent need to revive damaged ecosystems. It is critical therefore to respond to this call for action, both individually and collectively, to protect biodiversity, as it underpins current and future human health, well-being and economic security.

It is in this context that North East Network (NEN) organised the 13th Edition of the annual Biodiversity Festival under the theme, “Embracing Biodiversity for Wellbeing”, on 9th March 2022 at Chizami village under Phek district in Nagaland, with over 150 participants from different communities and organisations. 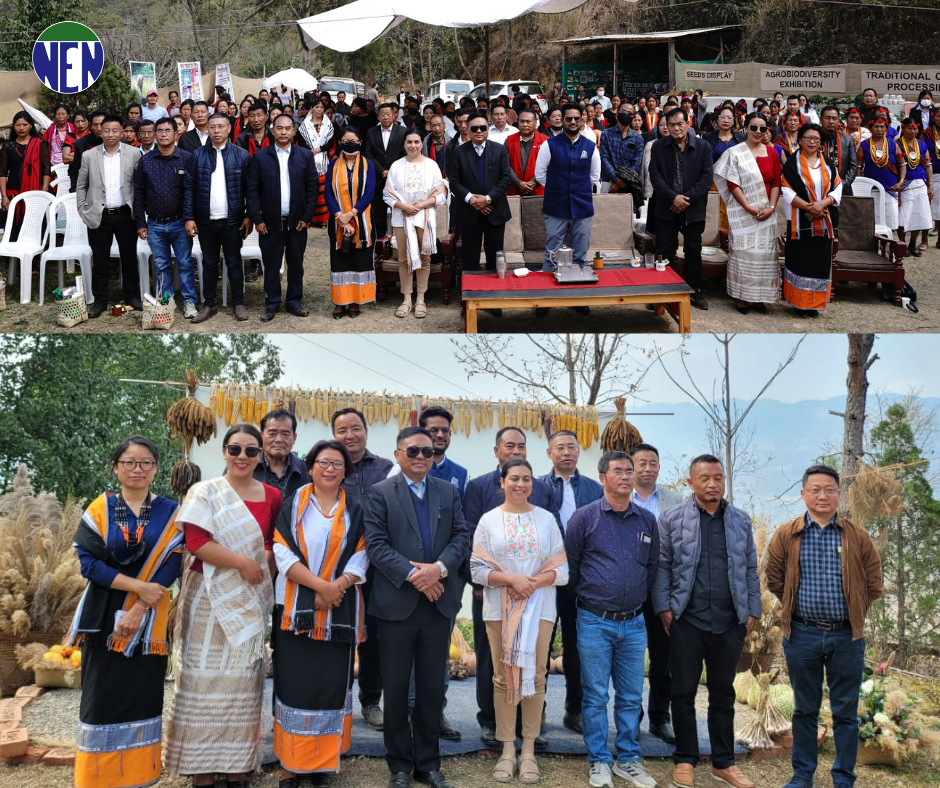 The solidarity speech was extended by Rose Rekha Dukhru, representing the Chakhesang Public Organisation. Addressing the audience she requested the communities to share the initiative with the apex bodies where the community can take collective conservation efforts, similar to the CPOs of Chakhesang community. Tamara Law Goswami, Executive Director, NEN and Wekoweo Tsuhah, State Coordinator, NEN Nagaland welcomed the participants and spoke about the significance of the Bio-diversity festival.

In her keynote address Tamara Law Goswami highlighted how the human- environment relationship is at risk. The Pandemic has revealed the fragility of human life and the first to be impacted is the women and the marginalised. She expressed gratitude to all the stakeholders especially for the overwhelming response from the Government led by APC, Agri & Allied Departments and indigenous farmers from all over Nagaland for attending the Festival.

Representing the community of Yimkhiung and Pochury, women farmers shared how important the biodiversity is to the community, how the community depends on it for its sustenance and the need to maintain the ecological balance for community well-being. 8 communities viz Enhulumi & Yakor, Chizami & Shatuza, Phek & Rusoma, Chingmei & Tsupfume exchanged seeds among themselves.

Since 2010, NEN has been organising Biodiversity Festivals that bring together diverse stakeholders especially farming communities from within and outside Nagaland. It has enabled participating communities to celebrate the rich agro-ecological heritage while creating wider awareness on the same. It has facilitated the sharing and exchange of knowledge on local food systems, on seeds, and culture among others. It has provided a platform for local communities to sell both food and crafts products, fostering solidarity amongst diverse communities. It inspired participating communities to adopt, and in some cases return to biodiverse agro-ecological practices, and traditional food systems, thereby generating wider understanding on their relationships with their food and natural resources vis-a-vis climate change, food sovereignty and other critical debates informing community resilience in these challenging times. Another important contribution of this Festival has been in collectivising and therefore amplifying the voices of local communities and their contribution towards a more sustainable future.

Biodiversity plays a key role in providing numerous irreplaceable services – economic, ecological, recreational, cultural, and scientific to the global community. Today, one of the biggest challenges facing communities that are dependent on natural resources for their lives and livelihoods is climate change.

Over the years, we have observed rapid changes in our agrarian communities, wherein a cash driven economy is overriding the subsistence economy that has sustained the livelihoods of communities in the NER over centuries now. Besides, farmers are steadily moving from a collective farming context to an individualized one that lays emphasis on profit maximization. This shift is gradually alienating communities’ intrinsic relationship with their commons – forest, land, seeds, biodiversity, water, traditional knowledge, and culture.

In the wake of COVID-19 pandemic, as the world witnessed economic collapse, loss of livelihoods, reverse migration, food insecurity, poverty and hunger, we also witnessed a demonstration of resilience by communities dependent on natural resources.

This crisis taught us of the vital role of biodiversity for human life and the importance of integrating biodiversity considerations in a COVID-19-related crisis recovery.