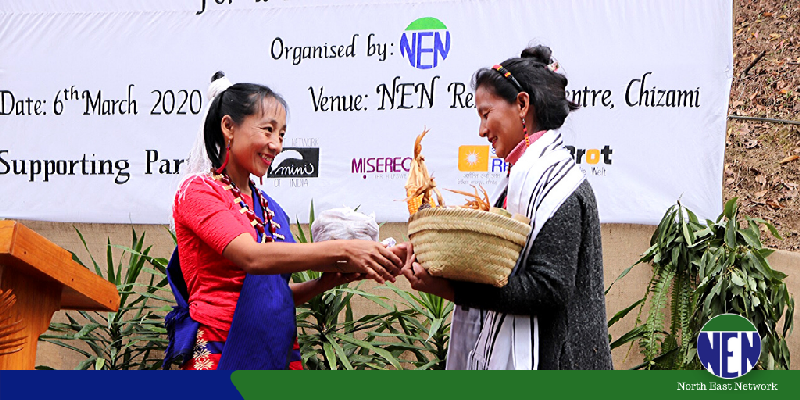 “Embracing Cultural Diversity and Biodiversity for a Resilient Future”

We organized the 11th Biodiversity Festival at Chizami under the theme “Embracing Cultural Diversity and Biodiversity for a Resilient Future” on 5th and 6th of March, 2020. Over 300 participants representing farming communities from the districts of Phek, Dimapur, Mokochung, Tuensang, Noklak, Kiphire in Nagaland, members of Millet Network of India (MINI) and All India Millet Sisters’ Network (AIMS) from Telangana and Gujarat, NGO representatives from Guwahati, Shillong, Darjeeling, Bangalore and officials from the State Government attended the Festival.

In her welcome and introductions, Seno Tsuhah, Director- Programmes, North East Network, Nagaland, highlighted the objectives of the Biodiversity Festival – to celebrate the rich diversity of our region; to acknowledge the contribution of communities for conserving biodiversity, genetic diversity in particular; to create a synergy between the young and the old, the traditional and the modern. She also spoke of the need to promote diverse livelihood that strengthens local ecosystem. For this to happen, we need multiple solutions and approaches and not just one solution.

Gracing the Festival as Guest of Honour, MLA & Advisor, IT&C, Science & Technology, New & Renewable Energy, Government of Nagaland, Shri. Mmhonlumo Kikon highlighted in his speech that “North East India is one of the mega biodiversity hotspots of the world, but today those of us living in this region are also facing challenges due to climate change. UN led initiatives have brought countries together to collectively think and act on their commitment to address carbon emissions. In order to bring solutions to these problems, we must contribute too, by thinking globally and acting locally”.

He asserted that preservation of our seeds, biological resources and culture is tantamount to the preservation of our race. In order to have a future which is secure for our people, we have to embrace the diversity, he noted. He further highlighted that we face the challenges of Biopiracy today, from outsiders and the government recognise this threat too. Nagaland is empowered with Constitutional provision of 371(A) that protects our resources, and this must be utilized for protecting ourselves from Biopiracy. He assured that the Government will develop modalities to protect the rights of our people vi-a-vis our traditional knowledge systems. He encouraged NEN to collaborate with the Government in making this Biodiversity Festival a state level event in the future, and reach out to larger stakeholders.

In his keynote speech, Shri. Supongnukshi Ao, IFS Member Secretary, NSBB, pointed that agriculture is the backbone of Nagaland’s agrarian society. Yet, today two biggest challenges threatening our State is climate change and the alienation of youth from their natural resource based livelihoods. He shared that the State Biodiversity Board (SSB) is planning to address issues pertaining to the preservation of traditional knowledge, agricultural practices, and biodiversity. He further highlighted the mandate of the State Biodiversity Board, which is to advice the State government on issues of biological resources, environment, and natural resource management. At the village level, Biodiversity Management Committee is created, to manage their biological resources within their jurisdiction and also to document their biodiversity. At present 80% provision of are being completed in the villages, he said. He also talked about NSBB’s future plan to have a People’s Biodiversity Register that will document all the plants, animals and traditional knowledge of communities to safeguard their rights.