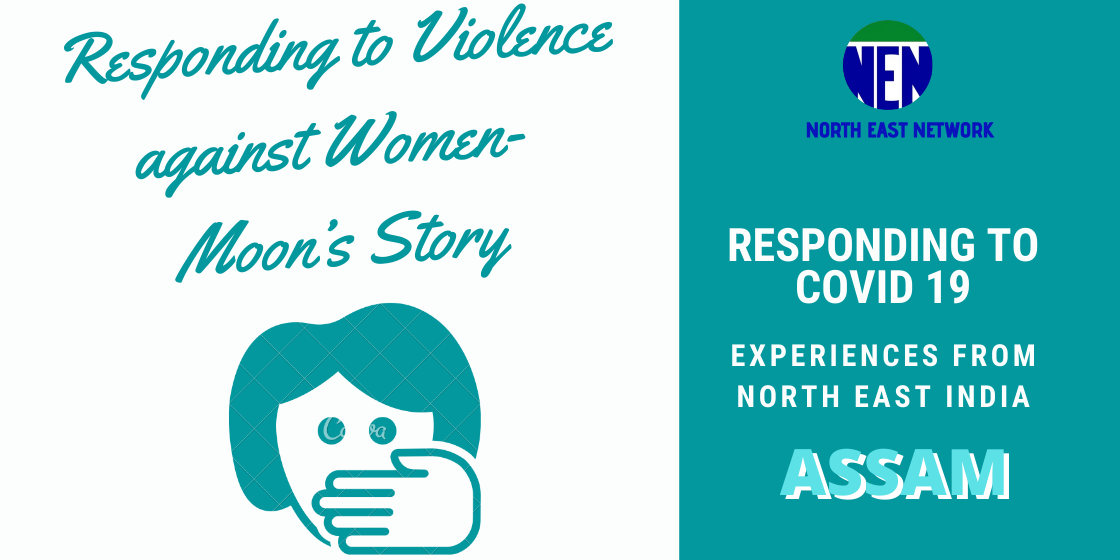 One evening, during the pandemic when the entire country was under lockdown, our community mobiliser Moon from Golaghat district received a distress call from an elderly woman. She informed Moon that a few days ago, her married daughter Gita (name changed) had returned home with her five-month-old daughter after being violently beaten up by her husband (Mintu). Moon urged the woman to share details over the phone.

The mother told Moon that her daughter had eloped a year ago and married him. They were only 19 and 20 years of age respectively. Right after marriage, Mintu had begun been inflicting violence upon Gita. He is an alcoholic and would always beat Gita on one pretext or another. About five days before the incident, when Gita could not tolerate the violence anymore, she along with her baby came back to her family. Owing to the lockdown, there was no public transport and she walked all the way home carrying the little one. When she arrived home, her mother could see that she has been severely beaten with bruises all over her body and was in a lot of pain. The next day Gita’s father brought some medicines and she began recovering.

When Moon inquired about the husband, the mother informed that neither the husband nor any of his family members had called so far. So the mother had called Mintu’s elder brother who initially did not wish to intervene as it was a ‘private’ matter between his brother and his wife. On further insistence, however, he agreed to speak to Mintu.

The next day, Mintu called up Gita and asked for forgiveness over the phone. He said that he wanted her to come back with his daughter. But Gita hung up. She wasn’t ready to return. The next day, a drunk Mintu came to Gita’s house. He told his mother-in-law that he cannot leave his daughter and that he had come for her. He also requested the mother-in-law to send Gita back with him, promising that he will never hit her and that he will quit drinking. Since it was getting dark and Gita’s father was not at home, her mother strategically asked Mintu to come the next day.

As soon as Gita’s mother left the room, Mintu snatched the 5-month-old baby girl from Gita and ran away. Gita started shouting for help. But by the time the mother came back, Mintu was nowhere to be seen. Since there was a lockdown, the roads were deserted and nobody came out for help. Gita’s mother urged Moon to help. She had no one else she could look to for help

After listening to the entire story, Moon started thinking of ways to get the little girl back. Because of the lockdown, it would be difficult to visit Mintu’s family. So, she advised the mother to inform the Village Defense Party (VDP) of their village and that she will also speak to the Secretary of the VDP. Moon also tried to talk to Mintu over the phone. However, after several phone calls to Mintu and his brother which were not received, Moon called up the VDP Secretary and informed him about the case. Moon reiterated the fact that by taking away a 5-month-old from the mother, Mintu has committed an offence not only against the baby but also against the mother and requested him to do something about it. The VDP member assured Moon that they would visit Mintu’s family the next day.

The lockdown has restricted everyone’s mobility and it was difficult to travel from one village to another. On one hand, Gita was getting restless, unable to feed her baby, on the other Moon was getting desperate to get the baby back to her mother and both of them spent another sleepless night.

Moon realised she had to think of another way. She called up a friend of hers from Mintu’s village who is a well-known person in the area and shared the case details with him. She requested him to visit Mintu’s home and take stock of the situation. Meanwhile, Moon also tried to mobilise the village headman, ASHA worker and ANM of her area. Since they were government frontline workers they were free to move around. The ASHA worker then called her colleague working in Mintu’s village and informed her about the case. Moon coordinated with her over the phone and asked the ASHA worker to inform Mintu’s family members about Gita’s legal rights and that the act of snatching the baby from her mother is an offence punishable by law. Mintu responded saying he wanted Gita back, he would not beat her anymore and would quit drinking. Moon was at a loss as Gita very clearly stated that she would not go back to Mintu again and as a feminist counsellor, Moon completely supported Gita’s decision.

Moon knew it was time for the police to get involved. She called the VDP Secretary who in turn called the police. It was the 6th day since the baby girl was separated from her mother. When Mintu came to know about police being involved in, he fled. The ASHA worker and Gita’s mother then went and rescued the baby who was finally reunited with her mother.

Community mobilisers like Moon are giving their all to respond to distress calls of women during the Pandemic induced lockdown. Fortunately, the networks they have built with multiple stakeholders over the years are coming to their aid. The Pandemic has compromised on the safety and security of women and children worldwide, but women like Moon are making all the difference.