Of Economic Empowerment and the freedom it brings-Dipali’s Story 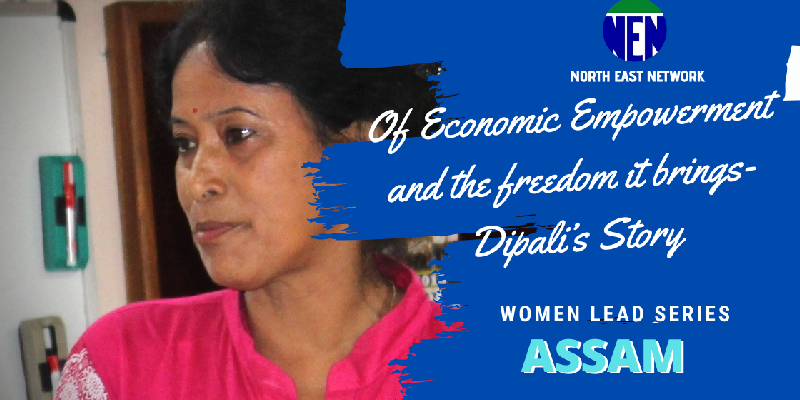 Born and raised in a hamlet in Assam’s Udalguri district, Dipali Bora’s life revolved around household chores, fishing and working in her husband’s field. She had always nurtured a desire to be self-reliant and effect change in her society someday but had no idea how to go about it.

When a Nari Mukti Sangram Samiti (committee for the freedom of women) was formed in Udalguri under the leadership of activist Akhil Gogoi, she rose to the occasion and led the Samiti as its Secretary in the district. Through this, she met Mridula Kalita who in turn introduced her to North East Network. We liked Dipali’s spirit and invited her to participate in one of our gender training workshops. Travelling alone, however, is easier said than done for a traditional Indian housewife and she was refused permission. She was also apprehensive about the costs it would incur. We were keen to have her with us and explained that we would take care of everything if only she showed the courage to come. To our delight, we were able to convince her.

She started her journey with Amaya Rabha the next morning. Farzila Begum from Darrang also accompanied them. That single incident changed Dipali’s life. She only went from strength to strength and as her association with NEN intensified, she also gained financial independence. The joy being able to afford a ceiling fan gave her was priceless.

Over the years Dipali has been able to make the women in her village aware about superstitions, women’s rights and entitlements, violence against women and support services. They have also gained the courage to raise their voice against injustice and be each other’s support systems overcoming their own caste and class biases. She has also mobilized the weaving community there thus enabling livelihoods for the women, knowing how transformational financial independence can be.

“Time is like ocean waves, what it brings in and what it sweeps away from life, no one could ever say. Little did I know about the change that was coming my way. Self-reliance has always been my long-cherished dream and today I have been able to achieve this for myself as a well as the women in my community.”

Dipali has been relentlessly engaged in relief work in her community. During the pandemic, she distributed relief to 50 women in 4 villages of two Village Council Development Committees in Udalguri District. She along with her assistant Bhanu reached out to some of the extremely needy families.

She is also in touch with the weavers of Saneki weaves, collecting the products and distributing yarns so that the weavers can continue their work and earn for their living. Apart from this, she also is encouraging the members of NEN’s Youth Collective to engage in creative work during the lockdown period.