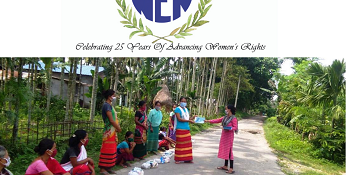 The COVID-19 pandemic has had a devastating impact on people from all over the world, regardless of class, caste, race, gender, and ethnicity. North East Network (NEN) has observed the adverse effects that the pandemic and the eventual lockdown have had in various districts of Assam. Women have suffered the worst of the worst because of their gender status and the harsh patriarchal realities. Dwindling incomes have led to the creation of a very stressful and tensed environment at home and in turn have given way to a sharp increase in abuse and violence, of which NEN has strong evidence. The nationwide lockdown that followed the pandemic had a severe and far reaching impact on the working class people. Millions of people who had lost their jobs, were without a source of income, slowly running low and out of food.

Many families who were affected by the pandemic had reached out to NEN, including women from interior villages. There was an absence of essential and utility services and thus, inaccessible for such households with the lock down barriers, lack of transportation and dangers of travelling out alone. Government schemes and announcements had not reached out to the masses. The economically deprived had not been able to get access to basic essentials and as a result, food insecurities within marginalised communities had sky rocketed; the need of the hour is proper distribution of dry rations. These unfortunate times had brought down unimaginable difficulties on the shoulders of marginalised and vulnerable women.To address the issue of widespread food insecurity amongst the economically deprived, NEN along with the support of APPI (Azim Premji Philanthropic Initiatives) had taken up the initiative to reach out to marginalised women and vulnerable families comprising of domestic violence survivors, single women/ women headed households / pregnant women and women with disability, marginal farmers, weavers, vendors, domestic and migrant workers, the economically weaker section of society ,in  10 districts of Assam and provided them with dry ration. NEN also realized that with change in circumstances and with opportunities for a steady livelihood no longer available, people from varied backgrounds such as marginalized small time actors, light boys, spotboys, dancers, etc. too had been facing financial challenges. They were identified and were also included in the list of recipients.

The distribution in Assam was carried out across the 7 districts, namely Darrang, Dhemaji, Golaghat, Kamrup, Kamrup (Metropolitan), Udalguri and Sonitpur, by NEN’s Community Mobilisers and Assistant Community Mobilisers, accompanied by support group members, women peer leaders and volunteers. In Golaghat, Darrang and Kamrup GraminMahilaKendras (GMK), which are also supported by APPI, took the initiative in the distributions. NEN had also partnered with the Block Federations (Rural Women Collectives) developed by Assam Mahila Samata Society(AMSS)located in various districts of Assam in order to reach out to and distribute relief materials to even more vulnerable communities in Dhemaji, Sonitpur, Darrang, and in 3 additional districts- Goalpara, Morigaon and Dhubri.

Dry ration kits were distributed to a total of 1600 households in Guwahati and all the 6 districts taken together.  The federation had also reached out to a total of 3200 households, taking the overall number of households up to 4,800. The period of distribution was from June to August.

There were several challenges faced during the distribution of relief materials in the city of Guwahati, Kamrup Metropolitan. The distribution, in some instances, could not be carried out in a systematic manner. Moreover, the food insecurity loomed large. We could only respond in a limited manner to the hunger call. These are critical issues which will be challenging to address. Despite the hurdles, North East Network managed to extend support to a diverse group of vulnerable and marginalised women, men and children. There are many lessons to be learned from the pandemic for future interventions. We strongly feel that the response to pandemic has to be gender inclusive, gender sensitive at various levels of interventions by the state and civil society.