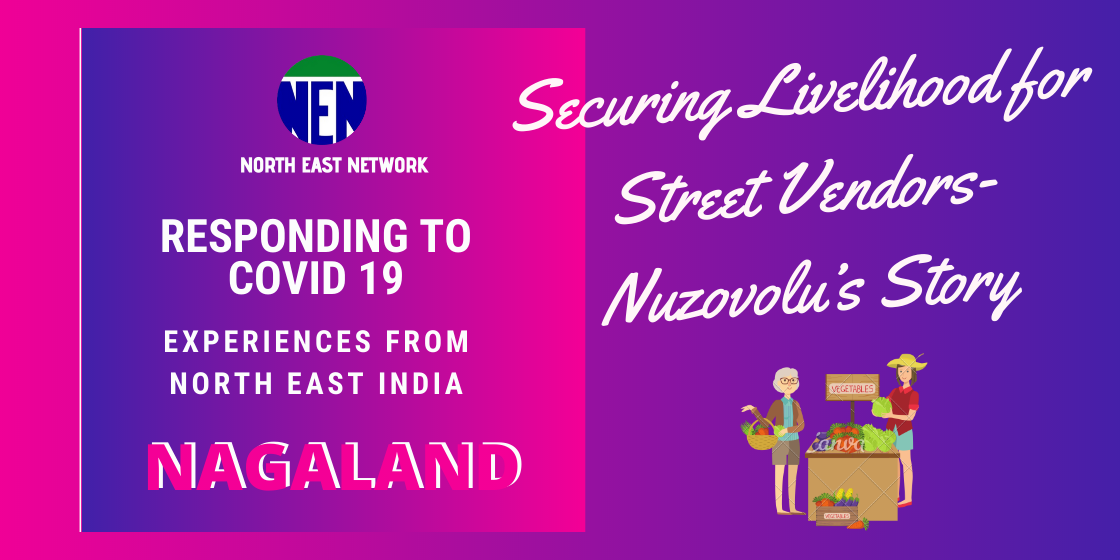 In the aftermath of the Lockdown imposed due to the COVID 19 Pandemic from March 23, 2020, women street vendors and member of the Self Employed Women’s Association (SEWA) in Kohima, Nagaland faced significant challenges in pursuing their livelihood. State authorities were not issuing permits to vendors on the designated days that were allotted for opening shops/ establishments selling essential commodities.

With no income, the women vendors were unable to buy these essential commodities to run their households and even pay their house rent. Out of desperation, there were times when the vendors would simply take their products to the markets on the open days but were chased away and told off by the town authorities.

Ms Nuzovolu, a home-based worker and a SEWA Agevan (leader) who has been actively working with unorganised women workers in Nagaland realized that this situation needed to change. She wrote to Kovi Meyase, Administrator of the Kohima Municipal Corporation (KMC) asking for permits to be issued for women street vendors who also supply the town with various essential commodities. The Administrator agreed and directed Nuzovolu to draw up a list of the vendors that are to be permitted to operate in the lockdown. She immediately set to the task along with Angunuo, General Secretary of SEWA Nagaland and by the 20th of April Kovi Meyase had the list. The process of getting the women vendors permits, however, was a long drawn one. It was only after a series of meetings with the Deputy Commissioner, Angami Youth Organization, CEO and Chief Inspector of the KMC that a consensus was reached and six locations identified in Kohima for the vendors to operate whilst maintaining all hygiene protocols.

Finally, after two weeks, Nuzovolu succeeded in securing Identity cards for 60 SEWA workers to vent in designated areas. But this wasn’t the end. Word spread and soon poor and needy vendors all across town began approaching Nuzovolu for permits. Some simply began vending in the areas designated for permitted vendors and this did not go down well with the authorities. Nuzovolu was at a loss. On the one hand she was tasked with ensuring that government directives were followed and on the other, she felt obligated to help the other street vendors as she knew their plight.

She chose to help the latter and her team further pushed towards creating more IDs for both these former SEWA and Non-SEWA vendors as they were facing the same problem in making a living to meet their basic needs.

At present Nuzovolu and the KMC are going out to bazaars to ensure that all vendors are following safety guidelines such as maintaining social distancing and not manipulating the price of products. She has been tirelessly working to ensure that women street vendors do not lose their livelihoods and are not rendered paralysed by the economic repercussions of the Pandemic.