Paving Their Own Way 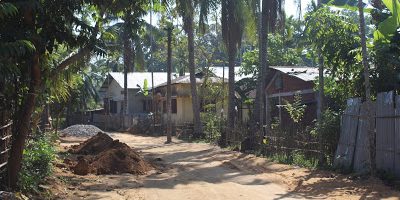 “Throughout the centuries there were men who took first steps, down new roads, armed with nothing but their own vision.” goes a Quote by Ayn Rand.
In this inspiring story from Sarpara Gaon however we need to replace the word ‘Men’ by ‘Women’. The road that went through their village hardly justified the name. For decades the villagers waited for it to be constructed and connect their little hamlet to nearby areas.

To be exact, The people of ward no. 7 of No. 25 Sarpara Gaon Panchayat in Kamrup district were  suffering from transportation problem for years due to the dilapidated condition of the connecting road from ward no. 7 to Sri Sri Vishnu Mandir, Rangiapara via Pub-Sarpara Hari Mandir. It was a bumpy ride for them until, the women of the village decided to take matters into their own hands.

In one of the community meetings organised by North East Network (NEN), the women of the locality raised the issue of the road. A resolution was taken to submit an application to the local MLA. Subsequently, Niva Das, Community Mobiliser of NEN took the initiative and collected signatures of 116 women in the application to the MLA. Almost 50 women under Niva’s leadership walked 5 km to meet the MLA and submitted the application on 27th May. The MLA assured them that the construction would start in July, 2018. He also promised that he would complete the construction within a couple of months.

Finally, the women’s efforts bore fruit and in July, 2018 the construction work started, and is now almost complete. What was wonderful was that the women of the locality did not allow labourers to be hired; instead, they contributed their labour in the construction of the road, thus adding to their own livelihood as well.