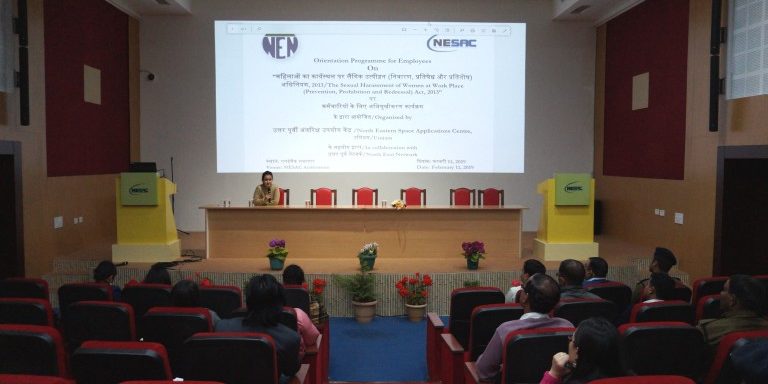 NEN organized 2 orientation programmes for the staff members of the North East Space Applications Centre (NESAC) on understanding the concept of Sexual Harassment and the rules under the Sexual Harassment of Women at Workplace Act, 2013, on February 11, 2019 at Umiam, Meghalaya. Earlier. following the success of the Capacity Building for Internal Committees of Government Departments conducted by NEN on Sexual Harassment of Women at Workplace Act, 2013 on July 5, 2018; the North East Space Applications Centre (NESAC) organized its first Internal Committee meeting on November 2018, wherein it was decided to hold an awareness for all its staff on the law relating to sexual harassment of women at workplace. Balarisha Lyngdoh (Senior Programme Associate) enlightened all the NESAC Support Staff on the Act and Joy Grace Syiem (Programme Manager) took the session for the researchers and scientist working in NESAC. A total of 83 participants participated out of which 59 were male and 24 were female. The training was very interactive and a number of clarifications on the law were made.