To strengthen gender perspectives for young boys and girls in Assam, a booklet “বৈষম্য় নহয়, সমতাহে” was released by North East Network on 25th August 2021, at Guwahati Press Club. The booklet has been authored by Rashmirekha Borah (PhD), Associate Project Lead, NEN, Assam, as a bid to fulfill a much needed gap of a comprehensive guide for young people wanting to explore gender in their lives and living.

The booklet covers illustrative discussions to explore concepts on social construction of gender, division of labour, gender identity, gender discrimination, gender based violence on women and girls, gendered social institutions and ends with myths and facts on these topics. The chapters bring to life their own experiences and also try to respond to their unanswered queries on gender. The tone of the booklet is user friendly and appealing for young minds.

The booklet was inaugurated in the presence of esteemed dignitaries who are prominent figures of women empowerment and education in Assam. Suranjana Senapati, Secretary- SEBA and Deputy Secretary (Secondary Education), Government of Assam; Gita Bhattacharjee – NEN GB Chairperson and women’s rights activist and Bandita Phukan, celebrated author of Assamese children’s literature were the special invitees. The guests along with Anurita P. Hazarika, State Coordinator, NEN and author Rashmirekha Borah formally unveiled the booklet which was then distributed among the audience. The event was hosted by esteemed social activist and journalist Chitralekha Baruah, on behalf of NEN.

In Assam, NEN had started working with adolescents in rural schools three years ago. Through creative medium such as puppetry, poetry, art, films and sports, NEN started to impart lessons on gender equality. When we started our work at the community level to address and redress issue of abuse and discrimination on women and girls, we felt that it is extremely important to sow seeds of gender equality early in life. We sought cooperation from local schools, and young students participated with enthusiasm. They got the opportunity to learn that gender sensitization is the gateway to a life of dignity, equality and safety for all. 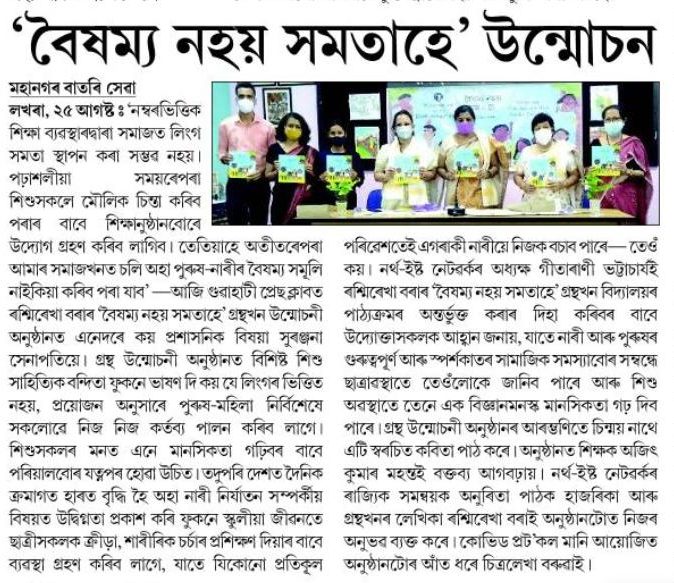