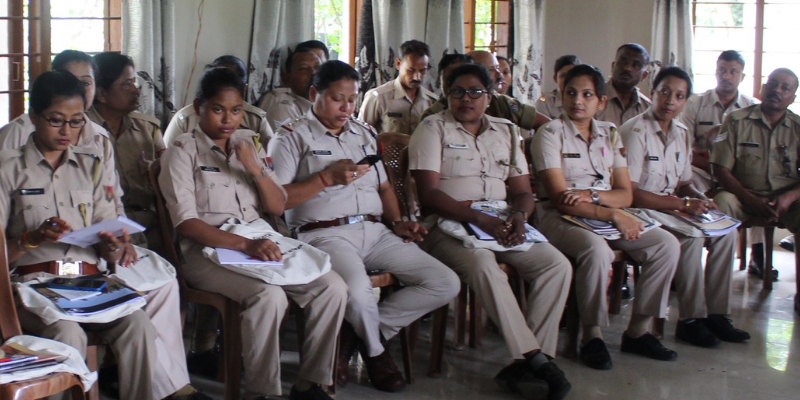 Through the years, North East Network has been consistently building the capacities and knowledge of its partners and stakeholders, in this case government departments tasked with the implementation and effectiveness of laws that aim to safeguard women’s rights. Our engagement with the Police in Assam has revealed many gaps in reporting of cases of gender based violence and actions taken due to inadequate understanding of existing laws and their relevance in the communities they are operational.

With the idea of inculcating gender-sensitive practices among the Police personnel in Darrang, our team in Assam organized a Sensitisation programme on Violence against Women and Legal Remedies related to Protection of Women from Domestic Violence (PWDV) Act, 2005 and Sexual Harassment of Women at Workplace (Protection, Prevention and Redressal) Act, 2013 in collaboration with the Assam Police today for about 50 personnel of ranks ranging from Constable to Inspector level from different Police Stations, Out-posts, and the Women Cell of the district.

The resource team comprised of DSP Anita Hazarika, Secretary of District Legal Services Authority (DLSA) Mukul Chetia, Women Cell, Police, Darrang, Protection Officer of DCPD Pallabi Sharma, Nilanju Dutta and Anurita P. Hazarika from NEN. The programme began with imparting a foundational understanding of domestic violence and sexual harassment of women at workplace to enable the audience to identify exploitation and gender injustice when they see it, as the first step towards effective legal action. Different forms of domestic violence like physical violence, verbal violence, sexual and violence emerging from dowry demands where listed out and explained.

The following discussion on the Protection of Women from Domestic Violence (PWDV) Act, 2005 and Sexual Harassment of Women at Workplace (Protection, Prevention and Redressal) Act, 2013 were met with slight criticisms with respect to misreporting. A few among the audience where of the opinion that woman were misusing the Law and as a weapon to seek revenge or to commit fraud. NEN attempted to break these misconceptions through dialogue and interactions

A panel on the role of the District Legal Service Authority and the District Social Welfare Office at Darrang, important stakeholders on the issue, discussed how violence on women could be mitigated by conducting campaigns and helping economically marginalised sections of women to empower them to claim their rights.

Anurita Hazarika spoke on how women face sexual assault in different forms in the workplace and in many situations they are unable speak directly with anyone and in the fear of losing their job. She discussed the SHWWP Act, how is it implemented as law and what measures and legal remedies exist to address such issues at workplace and make space safer for women. The Act is more relevant now than ever because of the growing number of women in the workforce. She also spoke about DIR i.e. Domestic Incident Report that is filed instead of FIR (First Information Report) where the victim can file or report the case at Local Complaints Committee which is set up at each district level. This improves collaboration between the Law Enforcement and Victim services.

The group of law enforcers were highly appreciative of the efforts that NEN is making towards curbing of domestic violence and sexual harassment at the workplace and felt that as a result of the workshop, they now had an in depth knowledge about how crucial proper implementation of these laws were to ensure that women are safeguarded from exploitation and are empowered to claim their rights and dignity.