Building Community Women Up to Claim their Entitlements Through Participatory Processes 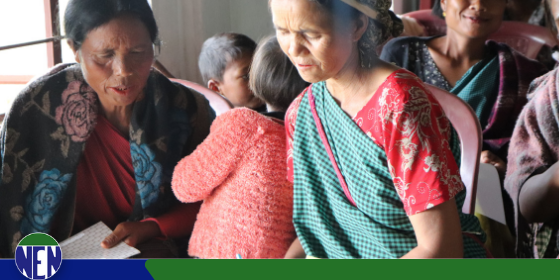 How much work do women think they do compared to their male counterparts? Do they get paid or even recognized enough for that work? Such were the questions raised by the team among the community women or the ‘Seng Kynthei’ as they are called in Khasi Society. As part of the agenda of strengthening women’s groups to claim their rights and entitlements, NEN conducted  a Participatory Workshop on the subject in the small picturesque village of Mawduh, located in the Nongstoin Block, West Khasi Hills District of Meghalaya.

NEN has consistently promoted women’s empowerment in regions of the Northeast by addressing structural inequalities and inequities through collectives and strengthening women’s institutions, voice and agency. This workshop was thus designed to enhance the perspective of the existing community women’s group on the very concept of gender inequality, an idea that most urban dwellers take to have existed for a long time now. Ideas like the gendered division of labour, women’s individual identity separate from the family, her rights and entitlements were introduced to the group of women who were largely agricultural in occupation but worked on government development initiatives as well under the MNREGA scheme. Through this workshop we aimed at building and strengthening collectives so that they can claim their rights and better access to public services.

More often than not, women discredit their own work, a classic feature of internalized patriarchy. NEN engaged with these women to break preconceived notions of undermining the efforts they put into the functioning of a society through various activities that included a measurement of the work each gender does, through scales. It was a fun activity that was quite revealing and made a significant impact on the way these women viewed work.

In conducting such programmes to geographies that are fairly difficult to access, NEN owes a lot to its outreach workers, community women leaders that have taken our work to places that we could not have reached on our own. Mawduh’s is one such story where our community leaders have built a receptive space for women’s organizations such as NEN, thus creating a ripple effect of our initiatives to spread gender equity.