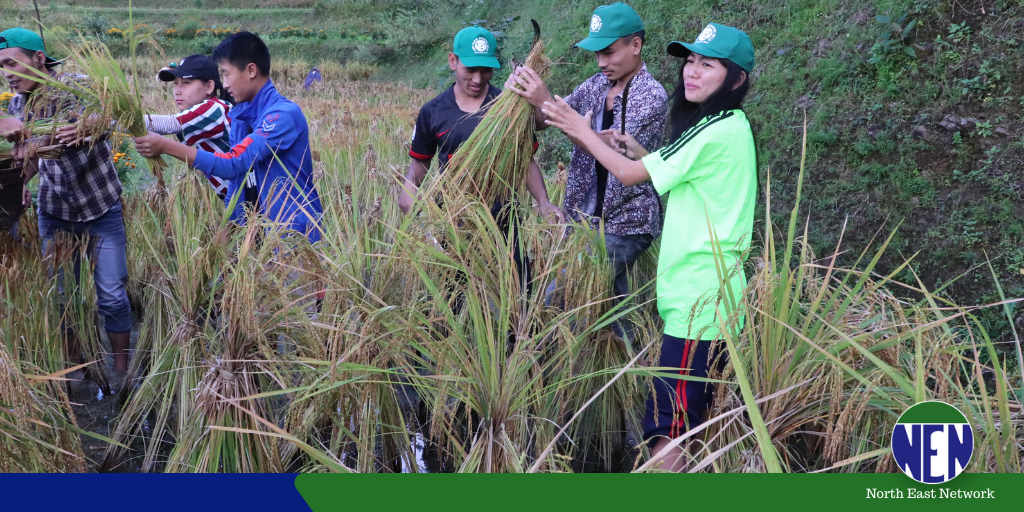 In the age of supermarkets and online shopping, there is an increased disconnection between young urban people and their food systems, more so in the urban areas. North East Network understands that there is an urgency to reconnect them if we are to maintain food autonomy. In Nagaland agriculture is synonymous to culture and for the latter to thrive; indigenous farming systems must be preserved and taken forward. With our continuing intent of ‘Bridging the Farm-To-Plate Gap’, twenty students from five higher education institutions from Nagaland embarked on the journey to understand their food, where it comes from and how they are an important link in the ecology can biodiversity of the regions they inhabit at the recently concluded NEN Farm School held at Chizami, Phek district, Nagaland.

Initiated in 2016, this is the 2nd such school organized this year owing to the overwhelming response that it has come to receive since its inception. The four days residential programme beginning on 25th to 28th October has been experiential learning for the students who gained new perspectives on the food web and the intricate relationships that exist within.

The participants learnt that bees, butterflies and moths, besides others play a tremendous role in our ecosystem. Mr Kekhrowe Tsido a beekeeper from Enhulumi village led this interesting session on beekeeping with his practical experiences and demonstrations including his traditional bee boxes. The biodiversity walk guided by community knowledge holders Ms Kediu Mekrisuh and Ms Keneile Thopi has strengthened the knowledge of students on the value of abundant herbal plants in the nearby surrounding forests.

Rice is staple to the Nagas. To give students hands-on experience with the traditional paddy harvest in the terrace field, we facilitated a day-long harvest session. Issues on seed conservation were also deliberated on with practical exposure to one of the Community Seed Banks located at Chizami.

Life in a rural community is characterized by strong cultural beliefs and values. Signs of nature guide the agricultural calendar of the people. Zulhipe Chirhah and Wenyilo Naro shared fold tales embedded with such cultural nuances, for the students sitting around the fire. A folk song was also presented by the group of elderly people present.

The closing ceremony of this farm school coincided with the 14th Foundation Day of the NEN Resource Centre at Chizami and was celebrated with much pomp. Addressing students at the valedictory, Mr Vekuto Vero, SDO (Civil) Chizami encouraged them to take back the learning voicing his concern of the state’s high rate of dependency on external food supplies.

Vekuto Vero, SDO (Civil) Chizami speaking at the valedictory programme on October 28th which also coincide the 14th anniversary of the NEN Resource Centre Chizami encouraged students to take back the learning voicing his concern of the state’s high rate of dependency on external food supplies. Wetshete Thopi an assistant professor at Patkai Christian College Dimapur appreciated NEN’s efforts in emerging as an important centre of education which has reached out to numerous stakeholders. Noting that the indigenous communities harbour 80% of the world’s biodiversity in their lands he said the traditional knowledge and practices hold the key to protecting such biodiversity. In commemoration of the foundation day, highlights of the latter’s journey since its establishment in 2005 was presented by Wekoweu Tsuhah, our Nagaland State Director. The students put up a great show that included role-plays, songs, a poster exhibition and finally sharing their four-day experience.

The 5th edition of the NEN Farm School has fruitfully ended with encouragement and hope that these students will be ambassadors to the organization’s larger vision of creating an ecologically sustainable future.

NEN will continue to hold these farm schools in future to create young urban sentinels who are informed of the ecological and social impact of their actions and build movements to safeguard the lives dignity and rights of the farmers.

Watch this space for future announcements so that you get a chance to be a part of our next farming education programme.