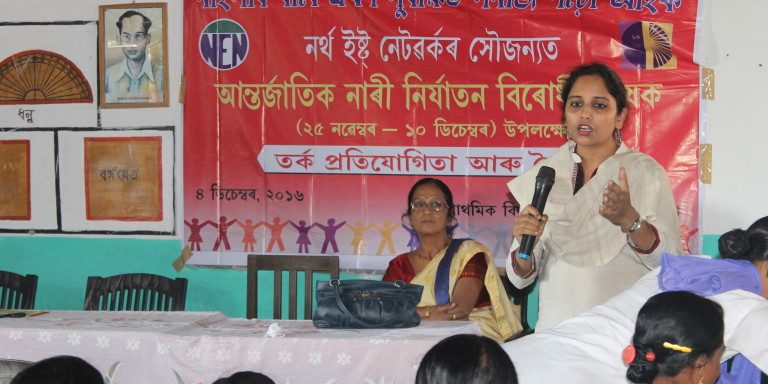 The 16 Days campaign to end Violence Against Women was observed by NEN in collaboration with other civil society organisations in the three states of Assam, Meghalaya and Nagaland. A series of events were organised to spread awareness throughout the campaign period.

NEN Nagaland organised a painting and photography competition on the themes ‘Gender stereotyping/transforming gender relations in the 21st century,’ ‘Challenging gender inequalities’ and ‘Safe public spaces and structures’ for students and youth at T.T Stadium, Kohima, on November 26, 2016. Thirteen students from two educational institutions participated at the competition. Photos of some of the winning photographs and paintings are added below.

On December 3, 2016 NEN along with a collective of young people from diverse walks of life come together at Old MLA junction, Kohima to protest against Violence against Women and girls. Using art as a medium- Photographs, Paintings and banners conveying messages of gender stereotyping, gender based discrimination and violence against women were displayed along the street. This was coupled with music performances on themes of love, peace, harmony and liberation by the Desert King Entertainment group of Kohima. Considering dance as a symbol of liberation from fear, discrimination, oppression and violence, a group of 55 young people performed dance on the key message of the event ‘Break the chain’.

Based on this year theme ‘From Peace in the Home to Peace in the World: Make Education Safe for All’; North East Network started an initiative to open School Libraries in aid of 3 Schools in Shillong, namely, Dinet Manik Syiem Memorial Hr. Sec. School, Nongthymmai; St. John Bosco Sec. School, Mawshbuit; and Seng Khasi Raid Laban Sec. School, Lawsohtun. The aim of this initiation was to aid schools with library facilities and their students to have rightful access to a library which will enhance their learning and knowledge.